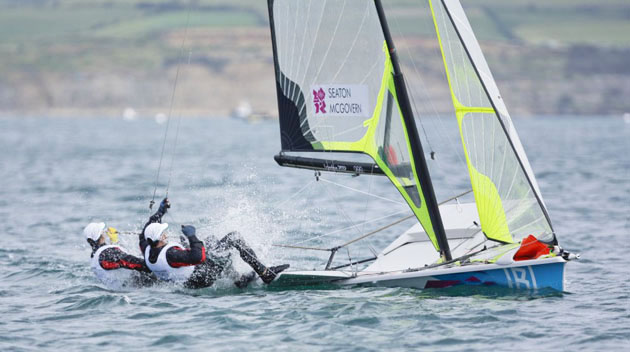 Ryan Seaton and Matt McGovern who had an excellent opening day of sailing in the 49er Class at Weymouth today. Picture: onEdition

A strong performance by the Irish Olympic sailors today in Weymouth sees three of the four campaigns lying in top 10 positions. Today was the first day of racing for the Laser Radial, Laser and 49er campaigns, while the Star went into today’s racing in second place after a strong performance yesterday.

The moderate south westerly 15 knot breeze saw Annalise Murphy get off to an impressive start in the Laser Radial class. She won both races today, leading Race One from start to finish. Race Two saw her battle it out with rival Evi Van Acker (BEL) who had a strong lead on the downwind but Murphy continued to put the pressure on the Belgian. Approaching the lay mark, Murphy made her move overtaking Van Acker and really pulling away to win her second race with ease. She now leads the Laser Radial fleet heading into Day two tomorrow. Murphy still has eight more races to sail followed by the double points medal race that will take place on Monday the 6th of August and can feel pleased with the forecast of more winds for the week.  Nonetheless, there will be no room for complacency and intense concentration will be required. With five more days of racing to go there is a lot of hard work ahead but she has the wonderful cushion of today’s two wins to boost her confidence. 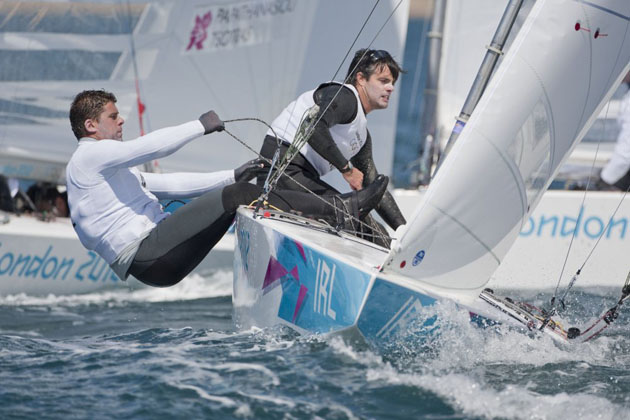 Annalise commented “I am delighted with today but it’s only the first day. There is a lot of racing ahead”. “I had a good start and tacked across the beat and pulled away. It was great. I couldn’t do much wrong today. I have got brilliant upwind speed. It’s all coming together.”

James O’Callaghan, ISA Performance Director remarked “Annalise got off to a good solid start but she still has five more days of racing ahead of her. This is her first Olympics and her competitors are well experienced with the Games. She needs to continue to focus as it’s still very early days”.

Today was the second day of racing for the Irish Star pairing, Peter O’Leary and David Burrows. They rounded the first mark of Race Three in 10th position but dropped down to 13th for the second and third marks, finishing in 14th. They maintained their position in the middle of the fleet in Race Four until they rounded the last mark and climbed from 9th to finish in 5th position and leaving them 5th overall. 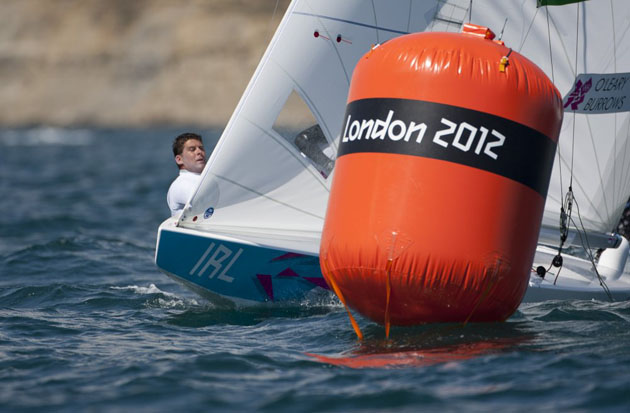 Close rounding for O’Leary and Burrows in the Star Class at Weymouth today: Picture onEdition

“The Star is a hugely competitive fleet as was seen by today’s racing. At the first mark all boats rounded within 60 seconds. This class is wide open but a good performance by Peter and David” stated O’Callaghan.

The Irish 49er duo Ryan Seaton and Matt McGovern got off to a solid start in their debut at the Games this afternoon. In Race One of their three lap windward-leeward course, they fought hard to climb up the fleet from 7th place to finish 4th overall.  They started Race Two in 9th, dropping back to 12th mid-way through only to return near the top of the fleet and finish in 8th. They currently lie 6th overall but still have a further 13 more races to sail followed by the medal race.

“This is a great start for the boys” commented O’Callaghan. “They’ve a long road ahead with another 13 races to sail before the medal race but they’ve shown they can perform under pressure.”

James Espey also began racing today in the 49 boat Laser fleet. He had a 38th and a 44th which sees him in 42nd overall. Espey has a further 8 races to sail before the top ten in the fleet sail the medal race.

Racing will continue tomorrow for the Star, Laser Radial, 49er and Laser. Sailing action will start at 12 noon in Weymouth.

All results are provisional.