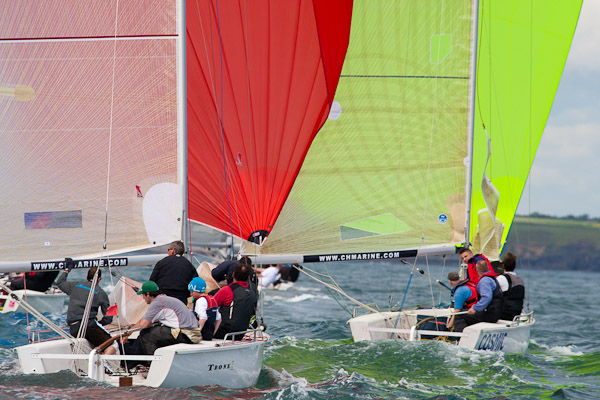 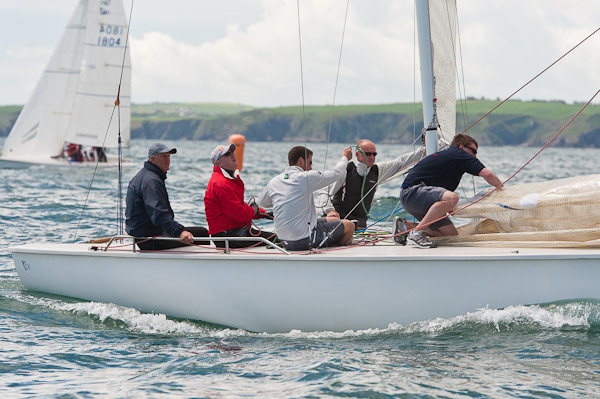 Due to the expected lack of wind  for today, June 10th, a decision was made to abandon the 1720 National Championships at the conclusion of Day Two of racing and the results as published yesterday stand.

After two days of racing and six races sailed and with one discard, the leader on 10 pts is Terry English and Mark Mansfield’s Gut Rot crewed by Mike Budd, Bernard Fitzpatrick and Joe Bruen.  Lying second is Anthony O’Leary’s Wet n’ Black crewed by Dan O’Grady, Derick Moynan, Eoin Leahy and David Whitaker. The Holyhead SC Ricochet of Steve, George and Tom Forester-Cole with Hannah Peters, Kelvin Matthews and Mark Lees in third place being very competitive and taking wins in two of the six races despite sailing in unfamiliar waters.

On a day when the weather was suited for sun hats and sun cream the wind was much more benign than yesterday with a steady southerly breeze  7 to 8 kts occasionally going to 10 to 11 kts.  PRO John Moynihan was able to set  windward leeward courses a mile east of Roche’s Point and got in four excellent races on the day.

At the conclusion of Race Six today the Race Officer had an unenviable task when six of the flying 1720s bore down on the finish line within seconds of one another in a tightly knit bunch more like the start than a finish of a race. Some spectacle to watch.