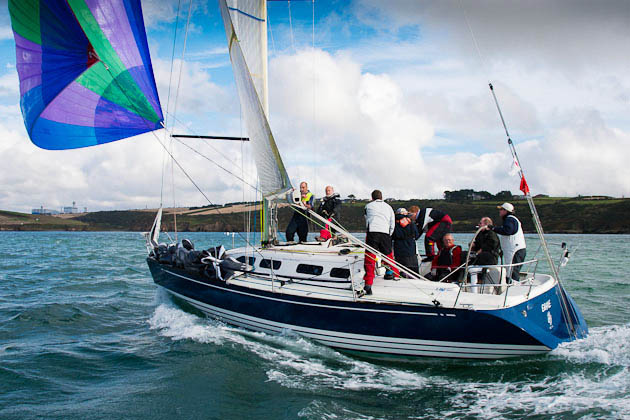 A graphic and fascinating description of to day’s sailing at the Marshall Marine Textiles Winter League courtesy of Michael Murphy ‘Shelly D’.  An interesting day in that the weather forecast turned out to be deadly accurate and the Race Organisers had prepared for every eventuality with great detail including shortening of the course.  The course was predetermined and a sheet showing same was given to each skipper of the fleet of intrepid mariners before they took to the water and this information was again radioed to the fleet as they arrived at the Grassy start.  Four rounds were scheduled to be sailed.

Racing commenced in 18 knots of a south/south westerly breeze.  Starting from Grassy the first round went to No. 5 port, No. 7port, 14port and back to Grassy and then on to round two first to 12 starboard, and back to Grassy where the organisers had taken the decision to finish racing.  What had started as 18 knots had increased to 26 gusting 30 and there wasn’t anybody about to question that decision.

A few brave souls did fly kites but that did not last very long in the conditions and indeed some were seen to be having difficulty retrieving them and ended up doing a bit of trawling.

The lower rated boats had possibly an hour and a quarter racing with the big boats possibly having slightly less.

Today’s overall winner of IRC All In was Derry Good’s Exhale and the Overall ECHO All In was the much travelled Ian Hickey’s Cavatina.