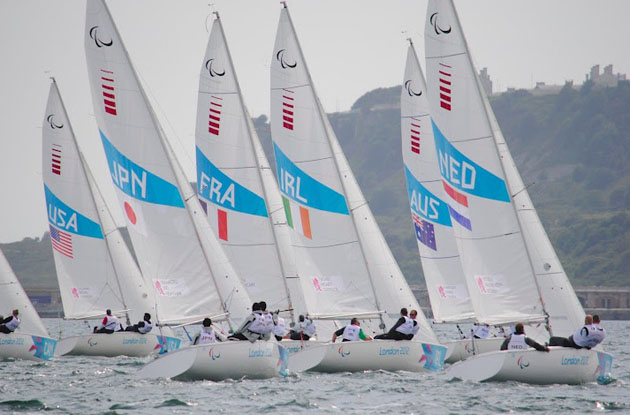 A good start on the first day of sailing in the Sonar Class for John Twomey and crew Anthony Hegarty and Ian Costello. Photo IFDS

Racing began today (Sat)  for the Irish sailors in Weymouth at the London 2012 Paralympic Games. The trio, consisting of John Twomey, Anthony Hegarty and Ian Costello, placed 11th and 7th in the three-person Sonar keelboat class. They finished Day One in 9th overall with a further nine races left to sail.

A moderate south westerly breeze saw the team get off to a solid start in Race 1. They began in the middle of the fleet but slipped back to 13th only to climb back up the fleet to 10th ultimately finishing in 11th. Race Two saw the team back in 13th rounding the first mark but they fought hard challenging their opponents to claim six places to finish in 7th.

John Twomey commented “It was very shifty conditions especially in Race One. It’s early days and we’re hoping to improve on today’s  performance ”.

The 2012 Paralympics are John Twomey’s 10th Paralympics, a record for any Irish person competing at either the Olympics or Paralympics. Having competed initially in the discus where he won bronze in 1984 and gold at Seoul 1988, John progressed to table tennis and finally to sailing which has been his sport of choice since 1996. Anthony Hegarty has been involved in sailing since 2005 but this is his first time competing at the Games. This is also Ian Costello’s Paralympic debut.