By Bob Bateman on September 22, 2012 in Junior Sailing, Latest 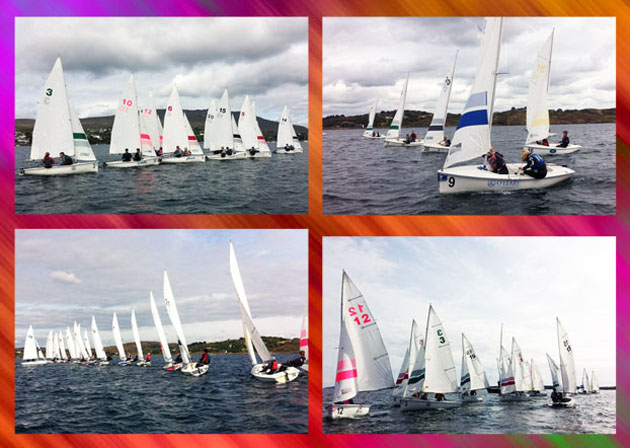 With five races sailed and after one discard, current leaders in the ISA Junior All Ireland Sailing Championship are Fionn Lyden  crewed byAnna O’Regan of Schull Community College SC  on four points. Finn Lynch and Sean Donnelly of NYC lie in second place on eight points. Royal Cork’s Eoin Lyden, cousin of Fionn, and crew Darragh McCormac are in third place on sixteen points. In fourth place are Mark Hasset and Florence Lyden of Schull Community College SC  on twenty one points with Séafra Guilfoyle  crewed by his brother  Criofan  of Royal Cork YC  in fifth place on twenty two points.

The Junior All Ireland Sailing Championship got under way today in Schull, Co. Cork. The invitational regatta saw twenty one of Ireland’s top young sailors take to the water in TR3.6 dinghies for the initial five races. A further three more races may be sailed tomorrow (Sunday) followed by a double points medal race decider for the top ten sailors.

Conditions were perfect in Schull Harbour for the windward leeward course with an easterly breeze. The first race got off to a clean start at 11.40am that set the tone for a smooth day of sailing expertly managed by David Harte and his race team.

Around the World in a Thousand Days – Friday October 5th – Cruising Dinner with Stephen Hyde
Optimist, 420 and 470 Munsters – Day 1