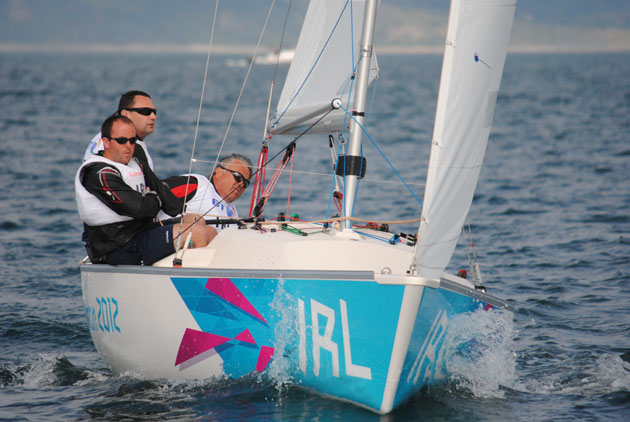 John, Anthony and Ian in action on Day Four of London 2012 Paralympic sailing. when they had a splendid result of second place narrowly missing out on first. Picture IFDS

Another changeable day in Weymouth for the Irish Paralympic sailors but resulting in the best performance of the regatta so far for John, Anthony and Ian. The trio came second in the only Sonar class race of the day which saw them move to ninth overall. The Sonar class will sail four more races as Race 8, the scheduled second race of today, was postponed until tomorrow.(Wed)

Today’s scheduled 11am race was postponed for two hours as Portland Harbour was once again flat calm. Frustratingly for the sailors, shortly after Race 7 began it had to be abandoned as the wind died completely. However at 2.45pm the breeze had reached 9 knots and Race 7 was restarted. Team Ireland got off to a superb start at the front of the fleet tantalisingly close to the German leaders, Kroker and teammates. John and his crew continued to keep the pressure on the German team remaining in second place throughout the race, sometimes as close as six seconds behind the first placed boat. Although having challenged for the top spot on numerous occasions the Irish boat just missed out on first place but had their best result so far with a second place finish

Afterwards John Twomey commented “It was a fantastic result for the whole team. There was a consistent sea breeze and after a good start we managed to remain in the top three. Our hope is to improve on our overall ninth place with four races remaining“.