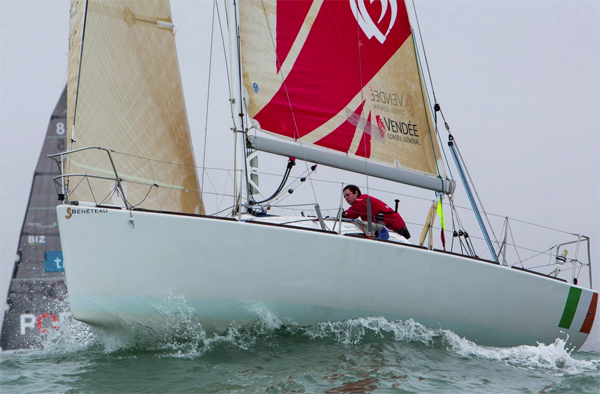 The fleet met 35 to 40 knot winds and at 8.15pm this evening (Fri) with some three to four hours to the finish at Sable d’Olonne Kenefick is well up in the rookie fleet. Pic: Grange@audialog.com

Update  Saturday, April 13th: David Kenefick has completed the Solo Arrimer in 21st place out of 25 boats and has now qualified to compete in the 2013 La Soitaire du Figaro starting in early June from Bordeaux and consisting of four legs each of several hundred miles.  This is one of the toughest solo races in the world and it is a superb achievement in itself to qualify to enter.  However, there is no time for any relaxation and the toughest work and preparation of his sailing career is now his complete agenda until the June start of the race.

Previous: Today sees the start of the final qualification race for rookie David Kenefick to take part in La Solitaire du Figaro 2013 commencing in early June from Bordeaux. For the first time he will have the chance to test himself against some of the top names of the cream of the Figaro fleet such as Armel Le Cléac’h, Michel Desjoyeaux whose boat he has chartered, Yann Eliés, Jerémie Beyou, Gilles Le Baud and Nicolas Lunven to name but a few. There will also be seven other rookies at the start so it will make for  a very interesting racing to follow and the experience will surely prove to be invaluable in their learning curve. This  race will be the longest non stop solo to date for Kenefick and with an entry of some twenty five boats he will certainly have  tough going ahead.

I quote from Kenefick and share his thoughts that give us an intimate insight on what it’s like to be awaiting the start of such a tough competition:” It’s a long course they have set us, the longest I’ve sailed at 305 miles, but ironically it may end up being only 36 hours in duration as there is plenty of wind and it is mostly a reach up and down the French coast. We head initially South East to pass inside Ile de Ré and under the bridge that joins it to the mainland by La Rochelle, before heading North all the way up inside Belle Isle to a mark just off the tip of the Quiberon Penninsula. We then return via Les Sables d’Olonne to round Ile de Ré again, but this time in the other direction before heading to the finish line again.

My objectives for the race are: number one to finish the race, number two to stay in touch with the sailing legends that have also entered the race for as long as possible, and three to gather as much experience as possible. You can follow the race and my progress with the tracking system on the event website here http://yb.tl/sfa2013.
I’ve learned this week about the unbelievable amount of preparation that goes into entering and being cleared to race. The amount of paperwork is unbelievable but all necessary. We have been working hard on weather and navigation briefings as the start time rolls closer and we have a better idea of what we will experience on the weather side and hence at what time and what state of the tide we will round the marks on the course. We have been checked by safety scrutineers, sail measurers, the press and of course Mathilde at the Class association has diligently helped us all with the required certificates.

Safety is a serious business and no one takes it lightly. I already appreciate more now than I did a week ago about why things are done the way they are. Being in this environment for a week allows us to learn from the older and more experienced skippers about their preparation, what their priorities are and where our own preparation is lacking”.

Bonne chance from all of us.