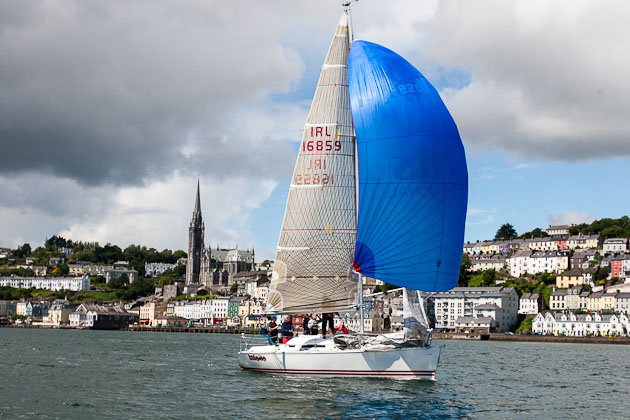 The Aghada race for cruisers was sailed yesterday (Sat).  Doing the honours as Race Officer was Mike Roche .  The course was a start using Cork Beg, No. 8 starboard, EF2 to port, No. 20 starboard, No. 14 starboard and a finish off Aghada Pier between A2 and and RIB anchored north of Aghada Pier.

It was an all in start and first off the line and, sailing in a purposeful way, was the Deasy/Ivers/Desmond Bad Company followed by Derry Good’s Exhale. There was a west/north west wind and a lovely clear day with blue skies.  The trouble was thunder showers could be seen right around the harbour but more about that later.

Having reached the first weather mark, No. 8, the boats set off on a fetch to EF2 and it was here that the race got interesting.  Following that the course effectively took in two windward/leeward rounds.  It is said that sailing is not a spectator sport but it was most interesting to watch how the yachtsmen managed these legs.  What they had was a tide and fresh water coming from an easterly direction and meeting the tide coming down from the city before joining together and running out the harbour in a southerly sweep.  To add to this the wind could be quite light at times and then a gust of 16 or 17 kts would come and it led to crews jumping inboard and then back onto the weather rail in an attempt to keep the boats on their feet.  This was very obvious in the case of David  Lane and Sinéad Enright’s An tOileánach and the same can be said of Kieron O’Connell and Graham Marron’s Bandit on the upwind legs.
The final leg was a run to the finish where the hapless Bandit was hit by a shower accompanied by loud peals of thunder with torrential rain that came virtually out of the blue and the crew struggled to get in the kite. 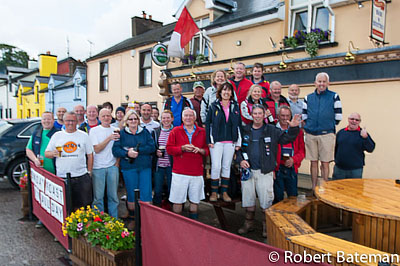 Some of the competitors ashore after the race. Picture Robert Bateman

And so on to Aghada where the pier has been closed for quite some time while repairs were being carried out to the stonework, the steps, and to the slipway.  Now all is in order again and the pontoons are back in location.  Lower Aghada is justifiably proud of its amenities and with a location in the south eastern section of Cork Harbour  is available for all seafarers to use and enjoy.

Following a visit to the local hostelry, the finish times having been worked on remotely, the Admiral presented the prizes and Bad Company’s endeavours were enough for his own consortium to receive the overall trophy.