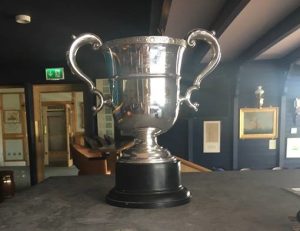 The Club received the Crosshaven Regatta Roche Perpetual Trophy, presented by Stanley Roche Esq., in 1957 and last presented in 1972.

It was first won in 1961 by Olympic sailor J. Clayton Love crewed by Dom Daly, which pair won it again the following year. It has also been won by J.B. Woodward crewed by Jim McCarthy, Harold Cudmore, crewed by Christopher Bruen and lastly in 1971 by Finian Lyden, crewed by Hilary Devlin. The winners attest to the level of skill and determination needed to win this Trophy.

Clayton Love Junior well remembers sailing and winning these races. He told me he sailed a 505 with Dom Daly (father of Ronan O’Gara’s wife Jessica) as his crew, they started from what is now the Hugh Coveney Pier, sailed out into the harbour, around several marks, back into the river, up river to Drakes Pool and down river to the finish.

We are delighted to have this Trophy back where it belongs. The letter accompanying the lost trophy explained with many apologies that “as no one ever asked for it, I didn’t look for it and there it lay”.