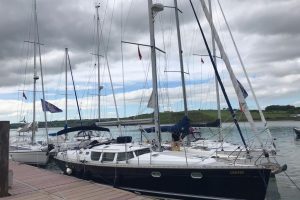 By Communications on July 24, 2020 in Latest, Motor Cruising, Yacht Cruising

The first Cruise in Company of the season was held on 17 – 19 July 20, with the destination being Courtmacsherry via Oysterhaven. In all eight boats took part and it was great to see new faces and new members joining the fun. Valery Murphy and Guatam on L’Enfant Sauvage were first out of the gate on Friday, heading for the overnight gathering Oysterhaven. Strong headwinds and a lumpy sea got the better of them and they decided to head for home. William Healy on Passing Wind also set off early in the afternoon followed by Keith Cruise on Robin. Both boats being sailed single-handed by their owners who were on their first cruise. Simon and Anne Brewitt on Callisto, Paddy Darcy and Family on Crosby, Phillip Myers, Paul Horgan and Family on Freedom and Batt and Helen O’Leary with Con and Claire O’Callaghan on Sweet Dreams followed the fleet a little later. Unfortunately, Mike and Aileen Rider on Freya were somewhat delayed due to a disappearing dog, which then reappeared and postponed their departure for Courtmacsherry until the Saturday morning.

The advanced party all arrived in Oysterhaven for the evening and settled down to their respective evening comestibles. The competition of the evening was to share photographs of their evening meals to prompt food envy and win a prize for the best presented meal of the evening. Despite the weather being a little damp, it did not curb the enthusiasm of the participants with some BBQing Steaks, deconstructing cheesecakes and producing pavlovas that would challenge the best of chefs. Pictures of empty plates and wine bottles rapidly followed. 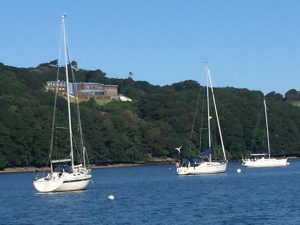 At anchor in Oysterhaven

Saturday morning started as a very soft day and the Oysterhaven six took a very relaxed approach to prepare for the trip to Courtmacsherry. Following on from the evening challenge, photographs of breakfasts fit for a king were shared. 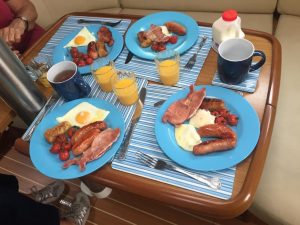 A good breakfast set us up for the day!

On starting his engine, Keith Cruise on Robin was greeted with smoke and steam coming where it should not. After phoning a friend and sharing a video stream of the problem, a faulty head gasket was diagnosed and unfortunately, much to his disappointment, Keith had to retire back to Crosshaven. The rest of the fleet departed Oysterhaven at 1100 hrs and met Freya on her way to the Old Head. We had a very smooth rounding of the Old Head with the tide just starting to turn and headed for lunch in Broadstrand Bay to wait for enough water to get into Courtmacsherry.  Keith Cruise reported his safe return to Crosshaven and after lunch, some brave people decided to take a swim with the youngsters on Freedom demonstrating some fine acrobatics off the back of the boat. 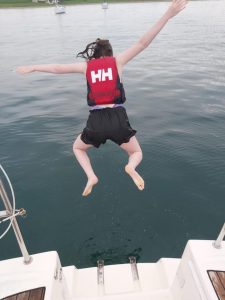 The young crew of Freedom brave the cold!

As we weighed anchors to head into Courtmacsherry, the sun began to shine. Like ducks in a row, we all followed each other down the narrow channel to the pontoon and were greeted by friendly locals helping us raft up for the night.

After sharing stories of the day’s adventures and partaking in sundowners framed by a stunning backdrop of the evening sun over the Courtmacsherry estuary, we headed for dinner in the Lifeboat Inn.  Great food and a great time was had by all, we then all gathered on the pontoon for a prize giving. For his ice-cool solo boat handling and mooring skills, William Healy on Passing Wind was awarded the Cruise in Company reusable ice cubes. The Ceremonial Chefs Whisk for best food pictures on the trip was awarded to Simon Brewitt. The junior acrobats on Freedom and very competent crew on Crosby were awarded ceremonial bubble wands and waterbomb catapults to keep their parents on their toes during their trip west. With most boats leaving at the crack of sparrows to catch the tide, we all retired to a peaceful night aboard.

Sunday morning saw Sweet Dreams departing ahead of the sun and all but Freya and Passing Wind following. After a leisurely walk around the delightful Courtmacsherry and brunch aboard we readied ourselves for a 1400 hrs departure. The trip down the river, guided by the local knowledge imparted by helpful boatmen, was without incident, and Freya and Passing Wind popped over the entrance bar with the sun splitting the stones. It was a most magnificent trip home all be the breeze light and fickle. A most enjoyable trip was had by all with new friends being made and it was great to see the enthusiasm and satisfaction of the new members who came along on their first cruise in company. 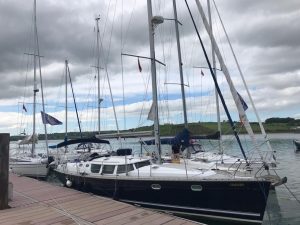 The fleet safely on the pontoon in Courtmac 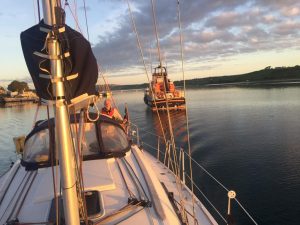 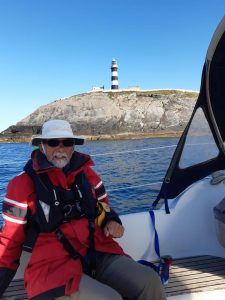 Rounding the Old Head and not a cloud in the sky!