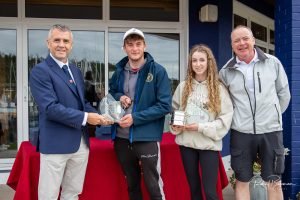 By Maurice Collins on September 20, 2022 in Lasers

The final day of the Cork ILCA Tri Series Sprints took place on Sunday in RCYC.

This was the conclusion of the series following sprint events in Bantry and Inniscarra over the past 6 weeks.
A total of 38 boats over ILCA4 and ILCA6 entered Sundays sprint with sailors coming from 5 Cork clubs to join the home sailors. Race officer John Corkery had the difficult task of conjuring up some wind where little to none was forecast. One race was completed when a slight sea breeze filled in from the South.
First in ILCA4 was Emma Barrett, Glandore Harbour Yacht Club, second was Ethal Bateman, third Isabel Mc Carthy, and fourth Oisin Pierse all RCYC.
In ILCA6 Oisin Mac Sweeney took line honors with Robert Jeffreys in second (and first master), Fionn Daly was third and Andrew Kingston fourth, all RCYC. First girl in ILCA6 was Ava Scarlett of Glandore.
The racing was followed by a barbeque on the club lawn and prize giving, where Rear Admiral Dinghies, Maurice Collins and ILCA Class Captain Tim Mc Carthy awarded prizes for the days sailing.
The overall prize for the series in ILCA6 was awarded to Daniel Mallon who received the Cudmore & Maher Cup. Isabel Mc Carthy received the Cudmore & Maher Box for winning the overall series in ILCA4.
Tim thanked all the sailors for competing and all the volunteers from all the clubs both on and off the water for helping out and to Eddie Kingston who was instrumental in setting up the Tri Series.

The Tri Series has been a great success and will be repeated again next year and is now seen as a great way for ILCA sailors to meet and compete in venues that are not usually on the ILCA circuit.