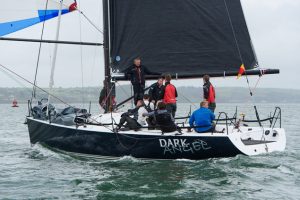 For many crews on Day 2 of the ICRA National Championships at the Royal Cork Yacht Club, the weather conditions seemed determined to merge Sailing with Mixed Martial Arts, such was the range of gear damage and minor bodily injuries throughout the 43 boat fleet.

Yet despite the gale force gusts throughout the day, three races were sailed resulting in a championship with the final day still on the cards though subject to similar or heavier weather conditions.

Both A and B fleets were started inside the shelter of Cork Harbour with just brief forays outside to Ringabella and Harp buoys for the bigger boats to test the conditions in the morning.

Only two of the five divisions have runaway leaders and a raft of mostly new national champions is likely tomorrow. 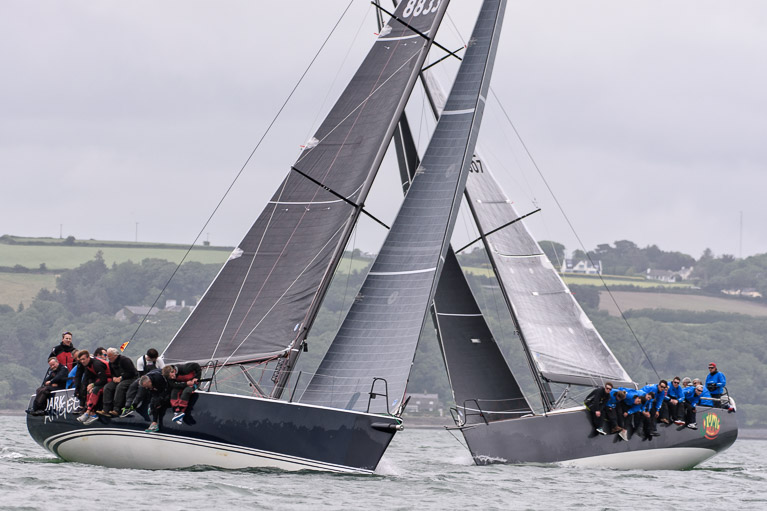 Although Conor Phelan’s Division Zero title on Jump Juice looks set to fall to Robert O’Leary on Tony Ackland Welsh visitor Dark Angel, straight wins for the visiting boat belies the nip and tuck match race sailed over the past two days.  The defending title holder hasn’t been able to open up distance on the lower-rated challenger in racing where the smallest handling error determines the result.

In Division One, John Maybury’s hopes for a third consecutive national title on Joker 2 are under pressure from Paul O’Higgins Rockabill VI who enjoyed resurgent form ending top boat for the day and coming within two points of Maybury in first place.  By contrast, after winning the opening race of the day Joker 2 placed out the top three for the next two races and faces a decisive final day.

A broken spinnaker pole for Division 2 title holder David Cullen on Checkmate XV ended his title hopes as he retired after the opening race of the day.  Howth YC clubmates Ross McDonald on Equinox in first overall and Johnny Swan on Harmony in second now lead the hunt for the national title.

Paul Gibbons’ Anchor Challenge is the only other class leader to match Dark Angel’s straight run of bullets in Division Three and appears unstoppable going into the final day.

Amongst the J24 battle that dominates the leading boats of Division Four, Darragh McCormack’s Foynes entry Stouche has risen steadily to top the leaderboard overnight after two second places and a win for the day.  Previous leader Flor O’Driscoll with Hard On Port from the Royal St. George YC had a good start to the day with a second but then had an On-Course Side starting disqualification in race two followed by redress in the final race after a Port and Starboard incident resulted in a series-ending collision. 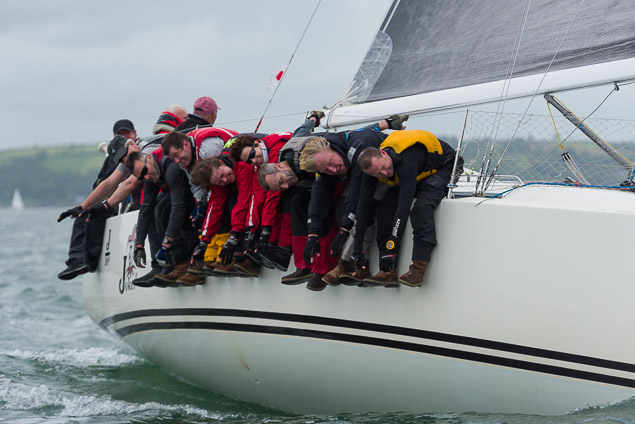 Meanwhile, amongst the two White Sails Divisions, two races were sailed for the day inside Cork Harbour where it was relatively flat-water but winds still funneled to Gale Force making for tricky racing.  Denis and Anne-Marie Murphys’ Grand Soleil 40 Nieulargo topped Division A under ECHO handicap with two wins while Clodagh O’Donavan’s Beneteau 35s5 Roaring Forties leads Division B with a win and a second place for the day.

“I want to pay tribute to the many crews who displayed great stamina and maintained a very high standard in the most demanding conditions today,” said ICRA Commodore Simon McGibney of Foynes SC.  “All week it seemed certain that we would have a memorable regatta and today is proof positive of this.”

With three races completed for Day 2, a championship series has been achieved plus a single event discard also came into force after race five.  As with Saturday’s schedule, race officers Jack Roy and Peter Crowley will decide on options for Sunday’s final races in the morning though with more high winds forecast, availing of the shelter of Cork Harbour appears likely.