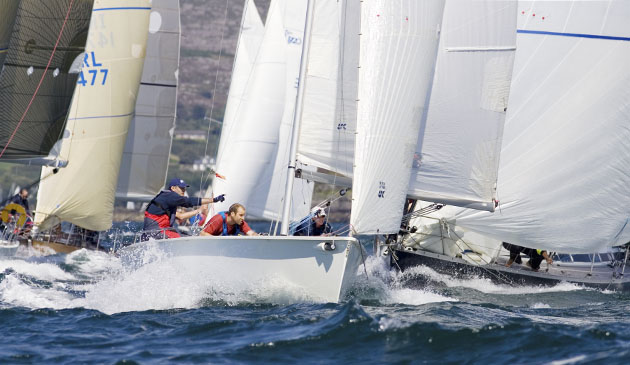 With over 40 confirmed entries at present, the 2012 Calves Week in Schull is again expected to top the 60 boat mark for the annual West Cork festival of sailing.

This year’s event will incorporate a race in the Scora Offshore Series and will feature racing for six classes with the ever growing white sail class split into two fleets and with a cut-off point of approximately 34ft.

The traditional overnight Offshore Scora race starts from Crosshaven on Friday night, August 3rd, while on Sunday the Schull/Baltimore regatta feeder race will provide ample opportunity for skippers and crews to familiarise themselves with Roaring Water Bay where principal race officer for Calves Week, Neil Prendeville, has drawn up a new course card featuring over forty courses taking in the many islands and natural marks.

The opening reception and skippers briefing will take place at the Fastnet Marine Centre on Monday August 6th with the first “Round the Islands” race starting at 12.30pm on Tuesday.

On Wednesday the fleet will sail two races on an Olympic type course in Long Island Bay, while Thursday will see the boats head for the Fastnet Rock .

The series will finish on Friday with racing in Roaring Water Bay followed by the overall presentation of prizes and closing ceremony on Schull Main Street.