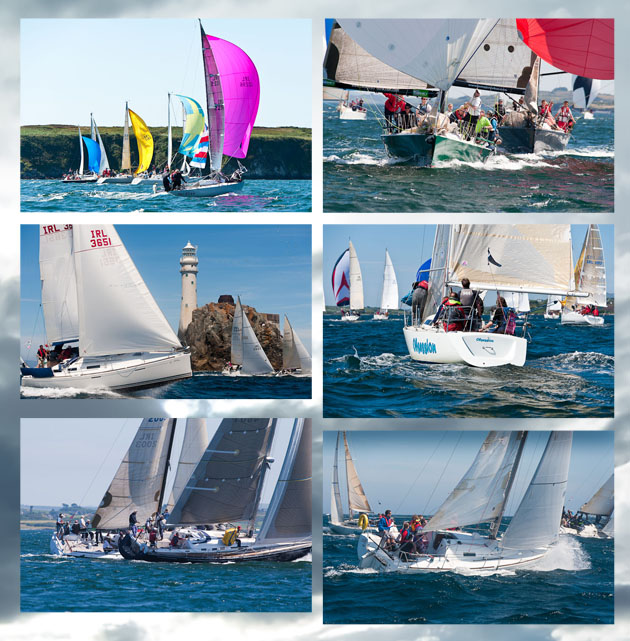 Given the fog and poor visibility experienced during the early part of the regatta week, the Organisers made the wise decision to switch the Fastnet race to yesterday (Fri) and what a day it turned out to be. There was a beautiful warm easterly breeze force 4/5 with non stop sunshine. Race Officer Neil Prendeville reversed the order of the start so that the lower handicapped boats started first and off went all the classes of the sixty boat fleet to enjoy a day the like of which has not been experienced for a long, long time and certainly not this year.  The wind, which was coming from the east, meant that instead of a start directly into the wind what they had was a reaching start and by the time it came to the Class Two and Three start they charged the line some believing that the buoy safeguarding the stern of the committee boat was an inner distance mark.   Both the Corby 25 Allure and the quarter tonner Per Elisa returned to start again before proceeding on a course that took them up Long Island Sound under spinnaker, seven and eight abreast,  and what a sight that was, before taking Goat Island to port and then a fetch to the Fastnet  which course was also followed by the Class One boats.  Being a Fastnet race with the magnet of rounding the famous rock, the boats as usual were packed with not only racing crews but there were also a lot of families on board from Grannies and Grandads to babies and even some canines, all having the time of their lives in the brilliant sun and white capped seas. 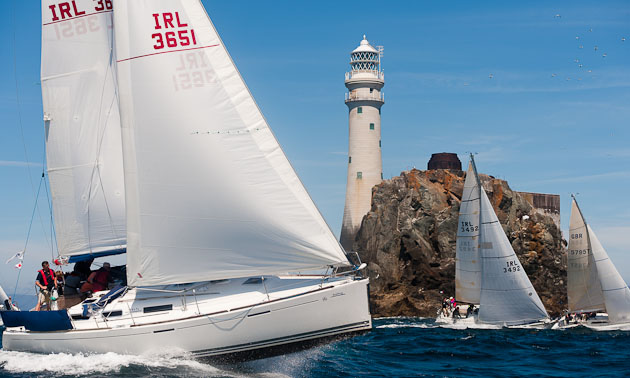 In a race like this taking in the Fastnet with the tidal sweep around it throwing up a lumpy sea it was inevitable there would be one or two incidents and one of these saw the Travers/Rohan quarter tonner Per Elisa doing a pirouette much to the astonishment of her helm and crew only to find their rudder had loosened and one of the other boats came to her assistance.  There were one or two other coming togethers in the tight racing and Pat Barret/Cathal Conlon  in Y knot came in to the finish on a tight spinnaker reach and experienced great difficulty in dropping their big red kite trying everything from going backwards and forwards and even sending a crew member up the mast to try to free it which they eventually  succeeded in doing.

In the midst of all this enjoying the glorious weather and sailing spectacle of the sixty boat fleet the cruise ship Hebridean Princess was arriving in Schull Harbour and the gentlemanly Master called the Race Officer  to ascertain the  situation and having it explained  to him  the race would last approximately another hour, brought his ship around Long Island through the Gascanane Sound to anchor at the mouth  of the harbour thus enabling his passengers to have the unexpected treat of viewing the racing in the unbeatable scenic surroundings.

In Class One IRC  Kieran Twomey’s “Gloves Off” returned to her winning form with a tight twenty second victory over Martin Breen’s “Lynx Clipper.This result confirmed “ Gloves” as IRC One overall boat of the week.
In Class One ECHO it was another popular win for Gabby Hogan’s “Growler”  that also saw him take the overall trophy.

In Class Two IRC Jason Losty finished a fantastic week in runaway  style with a comprehensive victory to take both the day prize and overall trophy, when his closest competitor the Travers/Rohan “Per Elisa” had to retire due to the already mentioned gear failure.

In Class Four it was a clean sweep in both divisions for the Murphy family in “Shelly D” while the overalls went to Richard Hanley’s “Saoirse”in IRC and the Molloy/O’ Shea duo on “No fixed Abode”, who despite a disqualification in the final race, won the ECHO trophy.

In White Sail One Michael O Leary’s “Act Two” revelled in the fresh conditions to win in both divisions and also took the ECHO overall while William Lacy in “Sojurn” collected the IRC trophy.

In White Sail Two Michael Hearn in “Summerfly” had a brilliant trip around the rock to win from Brian Ronan’s “Kopper Too” with the overall going  to Peter Morehead of the sponsor company, Cork Dry Gin, in “Giggles”.

All in all a perfect ending  to Cork Dry Gin Calves Week 2012.