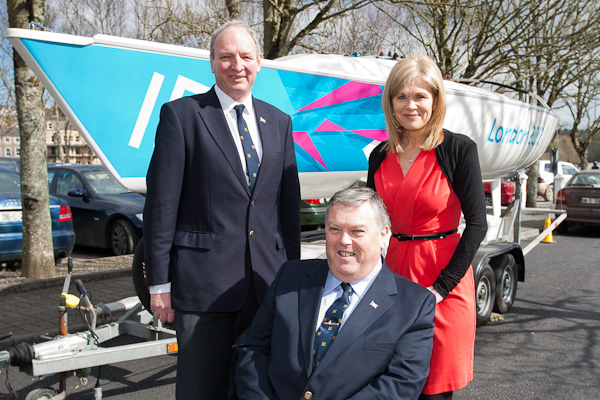 Yesterday Friday 5th of April, Kinsale Yacht Club announced plans to host the IFDS (International Federation for Disabled Sailing) World Championships for 2013. This will be the first major Paralympic event following London 2012 with 120 disabled sailors from 20 countries expected to attend the regatta. This was indeed a major triumph for John Twomey of KYC to be attending such an important announcement in his capacity as World President of the IFDS. John who has participated in 10 Paralympic Games, more than any other Olympic or Paralympic athlete, was elected to the office of President of the International Federation of Disabled Sailors at the ISAF (International Sailing Federation) conference in November 2012.

Speaking at yesterday’s launch Mayor of County Cork, Cllr Barbara Murray stated “Cork County Council is delighted to support this major international event in 2013. As part of Cork County Council IFDS Worlds, Kinsale is being marketed internationally as a major tourism and sailing centre of excellence and we look forward to welcoming all the sailors and support teams to a fantastic 10 day event in August”.

John commented at yesterday’s launch “I have received so much support from Kinsale and the sailing community over my years of Paralympic competition. It gives me great pleasure to host this event as IFDS President in my home waters”.

Kinsale bid for the event in 2010 against stiff competition from Perth in Australia and Qingdao in China. This is the first time that the IFDS Worlds are being hosted in Ireland. The organising committee, under the direction of Regatta Director John Stallard, has been developing plans since they were awarded the event in 2010. He said “the support we have received from Cork County Council, the Irish Sailing Association, Irish Sports Council, the Gathering and Eli Lilly has been tremendous. Since being awarded this event over two years ago we have received so much support from sponsors and especially from accommodation suppliers, restaurants and all the people of Kinsale. Teams from China, Japan, Singapore, Australia, USA, Canada, Brazil, UK, Germany, Italy, France, Greece, Austria, Poland, Norway, Israel, Holland, Portugal and Ireland are expected to attend amongst others”.