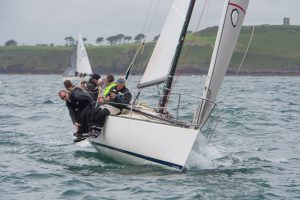 The start saw Ronan Downing and Kieran Collins heading out the harbour, taking different sides,  towards Roaches Point while Dave Lane’s J24 and the very exiting J70 headed towards Cobh against the tide and also took different routes.

In the end there was not much in it but estimating the time back to the finish proved the crucial point of the race.

There was not to be much in it at the end and indeed David Lane arriving one minute late to the finish was the difference.