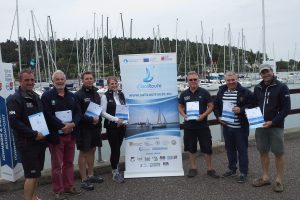 In October, 2015 Cool Route partners initiated a very wide area survey on the preferences, priorities, needs and interests of the yacht cruising community. The purpose of the survey was to obtain accurate  data on the views of people within the sector and to move towards establishing hard facts,  as against what might otherwise be considered as subjective views on the sectors preferences.  The study reached respondents throughout Ireland, Northern Ireland, Scotland, England, Wales, The Faroe Islands and Norway. Additionally, responses came in from Canada, USA, France and New Zealand.

Over 500 responses were submitted , all of which answered questions in relation to matters such as preferred daily runs, most important shore-side facilities, average spending and things to do and see,  to name but a few.

Most importantly an enormous amount of qualitative comments were submitted giving excellent insights into the opinions of cruising sailors, what they most value and also their impressions on whats good and bad about cruising in North Western Europe.

Speaking at the launch of the study, during Volvo Cork week at Cool Route partner The Royal Cork Yacht Club, Dr. Breda Kenny, Head of Hincks Centre for Entrepreneurship Excellent , who leads the overall project  stated:

“This extensive engagement with its most important stakeholders in the sailing world,  demonstrated clearly  the value of developing the Cool Route and its strong potential to bring new business opportunities to a myriad of small enterprises in remote coastal locations- supporting local economic growth and job creation in Europe’s  Northern Periphery and Arctic Area.”

The findings of the Cruising Preferences Study, which is the widest and most comprehensive engagement with cruising sailors ever undertaken in Northern Europe, will now form an important input to the ongoing development of the Route Marketing and Business Plans, which are being led by RCYC and CIT respectively.

The Cool Route team acknowledged the assistance of a very wide number of sailing organisations and clubs in helping to roll out the survey and also thanked every respondent for the wealth of insightful comments and suggestions.

A copy of the Cruising Preferences study is available here: