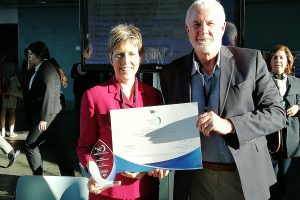 We are delighted that our lead partner Cork Institute of Technology (CIT) has scooped an Atlantic Project Award for its work in leading the Cool Route project. This year’s Atlantic Project Awards were presented today  (October 23rd) at a prestigious ceremony at the  5th Atlantic Stakeholder Platform Conference in Vigo, Spain. The Atlantic Project Awards, established in 2016, are designed to honour outstanding success stories achieved by projects in the geographical area covered by the Atlantic Strategy that showcase relevance to the implementation of the Atlantic Action Plan. They promote individual winners and at the same time highlight the incorporation and scaling up of best practices at regional, national, European and international level. This project was funded by the Northern Periphery and Arctic Programme. The 2018 Atlantic Award recognises CIT’s work in Creating a Socially Inclusive and Sustainable Model of Regional Development.

The Cool Route Project 2015-2018, is led by CIT’s Hincks Centre for Excellence in Entrepreneurship and had partners in Ireland, Northern Ireland, Scotland, the Faroe Islands and Norway. The Cool Route addresses the development of Marine Tourism, through the provision of small pontoons and marinas in peripheral coastal locations, which facilitate visits from all types of vessels, ranging from small private craft to liners. Even very large liners regularly disembark marine visitors using ship’s tenders. The project successfully completed a wide range of research into all aspects of is objectives.

Accepting the award on behalf of CIT from EU Commissioner Mr Karmenu Vella, Dr Orla Flynn, Cork Institute of Technology’s Vice President for External Affairs, praised the staff at CIT and their Cool Route partners around the Northern Periphery and Arctic Area for securing such an excellent recognition of their work and added that she is very proud of the role which CIT has grown and developed throughout the European Union as a partner of first choice in many European  Programmes. Dr Flynn advised the large attendance from all over the Atlantic Area, that CIT works with European partners in over 100 different regions covering every EU Member State. CIT also has very active engagements in South East Asia, the USA, and Canada, placing it on a global stage in terms of International Research and Education. “CIT’s global reach in terms of academic quality and research is also mirrored by the significant numbers of International students studying at CIT, which offers a very wide range of courses in many disciplines ranging from level 6 to level 10. CIT and the Institute of Technology Tralee are due to merge to become the Munster Technology University and today’s award will have pride of place in that new Institution” said Dr Flynn.

Dr. Flynn highlighted the value of local marinas and small pontoons to the tourism economy of peripheral coastal communities, noting that even liners could disembark visitors to areas having a small pontoon facility.

Cool Route partners and roles are as follows:

The Cool Route project website is available at www.sailcoolroute.eu