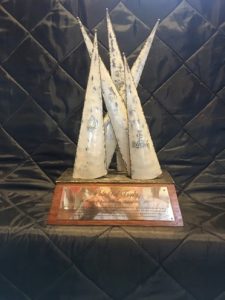 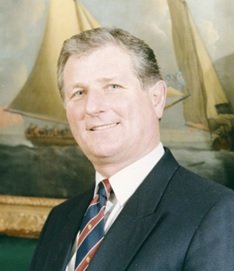 White Sail Trophy. In Memory of Conor O’Donovan, Admiral 1996-1997. The trophy remembers Conor O’Donovan and the boats that made so many happy memories. His first Boat Enterprise Dinghy “Crazy Cruiser” in Monkstown Bay Sailing Clubwas the boat he learned to sail in.. In his Shipman 28 “Poitin” he joined the cruiser racers of the Royal Cork Yacht Club. His Drascombe Dabber “Acorn” allowed him to explore the beaches and fish in Fountainstown with his young family. Club Shamrock “Marengo” built at Rochestown Boatyard saw a return to the racing fraternity and with it regular trips West. Finally X-Tension, an X 372 brought white sail racing and an ever increasing amount of cruising with cruises going further and further West”