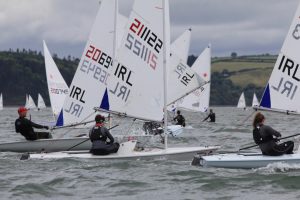 The Connacht Championships concluded on Sunday afternoon in Crosshaven after two days of racing in the East of Cork Harbour.  Sixty nine lasers across three fleets competed in the Championships with 4.7’s the largest fleet.  Thirty one club sailors competed at the event.  The forecast did result in a few sailors opting to race in the smaller rig moving from the Radial Fleet to 4.7 Fleet during the registration process on Friday evening.

Despite State exams still ongoing and some sailors away competing internationally it was great to see such a large turnout.

The PRO Ciaran McSweeney got three races away on Saturday in medium to strong westerly breezes with leaders overnight as follows – Darragh O’Sullivan, Kinsale YC/Baltimore SC in the standards, Jamie McMahon of Howth in Radials and James Delaney from Lough Ree/National Yacht Club in 4.7’s.

The Race Management Team on Capta Ventum got three more races completed in westerly breezes with the three leaders holding their spots despite some great racing by our club sailors.  Atlee Kohl, Rory O’Sullivan, Cathal O’Regan and Harry Pritchard all scored bullets in the 4.7 fleet, Chris Bateman and Michael Carroll in the Radial Fleet and Nick Walsh and Johnny Durcan also took bullets in the standards.

Laser Class Captain Pat Horgan commenced the prize giving ceremony offering his thanks to the 40 plus volunteers that assisted in making the event such a success.  Many of the club volunteers had no sailors in the fleet but returned to give a helping hand.  Given a large number of parents were at Optimist and Topper “away” events, this was particularly helpful.  The Club staff were also thanked along with the competitors who travelled.  Brian Jones, Rear Admiral Dinghies presented the prizes to the winners and a full set of results can be found here. 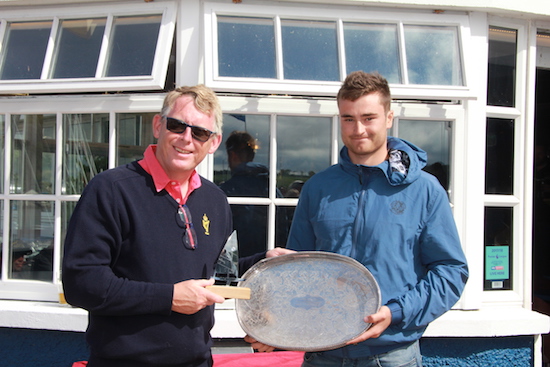 Photos can be found in the club gallery.