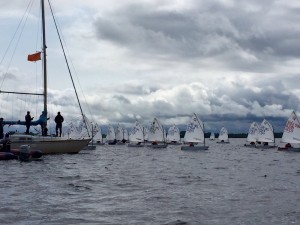 This weekend 24 Optimist sailors and their families headed to Lough Ree Yacht Club to compete in this year’s IODAI Connacht Championships.  We received a very warm welcome and some families chose the camping option onsite given it was July (someone forgot to tell the weather to turn up!).

We had 4 sailors in the 35 strong Regatta Fleet.  Due to the weather conditions on Saturday the Regatta Fleet did not go sailing.  Instead they visited the nearby Baysports Waterpark at Hodson Bay.  It is the biggest floating water park in Ireland!  However, the 11 knot breeze this morning was ideal conditions and they launched shortly after Main Fleet and completed 4 races.  The race area selected by the Race Officer adjacent to the yacht club permitted great viewing for parents left ashore.  Well done to our Regatta Fleet sailors – Jamie Venner was third overall (First U11), Simon Pritchard 5th, Max Coveney 9th and Alana Twomey 12th. 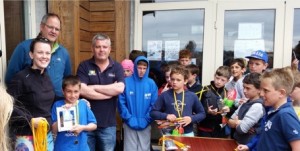 We had 16 sailors in the 64 strong Junior Fleet who completed 3 races on Saturday in testing conditions.  There was strong gusts reaching 20+ knots which created a short chop on the lake.  The girls were in control at the end of the day’s racing on Saturday with lighter conditions forecasted for Sunday.  This morning the forecasted lighter winds and flat lake provided ideal sailing conditions and the top positions changed with each race (3 races completed).   A squall hit the sailors in the middle of the final race causing several spectacular nosedives and slowed some sailors down.  The final winner of the Junior Fleet was Eve McMahon of Howth Yacht Club, Rory O’Sullivan was 2nd, Aoife Byrne 3rd, Harry Twomey 5th, Michael Crosbie 7th (First Junior Silver), Conor Walsh 9th, Ben O’Hare 14th (5th Junior Silver), Killian O’Regan 15th, Jonathan O’Shaughnessy 18th, Harry Pritchard, Adam Power, Eoin Horgan and Conor Aherne rounding out the top 30.  Justin Lucas, Patrick Bruen, Charlie Neville and Anna Carroll also did well and finished in the top 45. 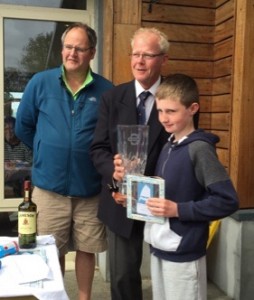 We had four sailors in the Senior Fleet of 38.  The overnight leader was Peter Fagan, Skerries Sailing Club with three bullets, however, like the Junior Fleet the change in conditions led to a change in leader with Clare Gorman of the National Yacht Club taking the Senior Title.  Cathal O’Regan was 16th, Kate D’Arcy 19th, Conor Horgan 20th and Sophie Crosbie 24th – well done to all our sailors this weekend.

Racing started today in Plérin, France and we wish Emily Whitaker and Robert Keal all the best who are competing with the IODAI International Development Team.