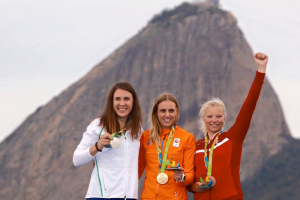 By pressoffice on August 16, 2016 in Cruisers, Uncategorized

“Netherlands win Radial gold, Ireland silver, Denmark bronze Marit Bouwmeester (NED) has won the Laser Radial gold medal that eluded her four years ago. Silver went to Annalise Murphy (IRL), a sweet reward after finishing an agonising fourth place at London 2012. Anne-Marie Rindom (DEN) took bronze. It was a tense Medal Race in light and fluky airs on the Pão de Açucar course in the shadow of Sugarloaf Mountain. Bouwmeester looked to be in a good position during the early stages, but a big split developed in the fleet after the top of the final lap, and the Dutch and Danish contenders were dropped to the back. They could only watch as Murphy and the other front runners sailed away and across the finish line more than a hundred metres ahead. It was so close between the front five boats on the final run, there was a chance the Irish sailor could steal gold from the Netherlands. But Murphy crossed the line in fifth, yielding the Olympic title to Bouwmeester. With Rindom back in eighth, Murphy had done enough to take silver. All three sailors celebrated and every one of them looked delighted to have emerged with a medal from perhaps the toughest sailing venue ever seen at an Olympic Games. Bouwmeester now has the gold to go with the silver she took in London 2012. By Andy Rice – World Sailing”