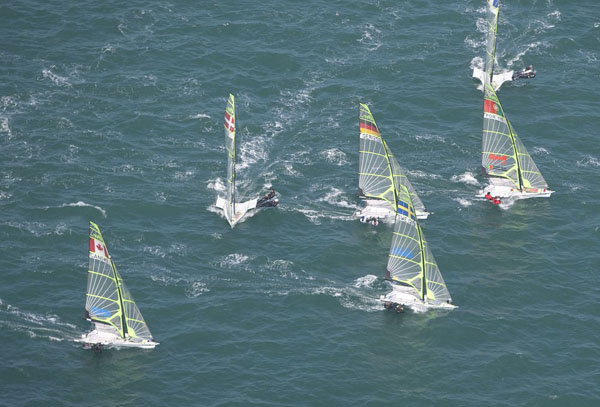 Miserable conditions at Weymouth today prevented racing for the Star Class. Having waited throughout the day, the decision was made during the afernoon to cancel racing for today.  Forecast for tomorrow (Fri) is not looking particularly good but we will just have to wait and see.

Conditions were good today at Day 3 of the Skandia Sail for Gold Regatta in Weymouth. After some patchy rain in the morning, conditions brightened up considerably as the day progressed and the sailors enjoyed a 12-16 knot south westerly breeze.

Peter O’Leary and David Burrows maintained their position amongst the top three of the Star fleet. They had a 7th and a 5th today leaving them currently lying third overall. Tomorrow they will continue their epic battle with two of their strongest competitors, Iain Percy and Andrew Simpson (GBR) and Robert Scheidt and Bruno Prada (BRA) tomorrow who hold a current lead in first and second respectively.

In the 49er class Ryan Seaton & Matt McGovern had their third race win of the championship today. The duo moved up three places to 9th overall following an additional 9th and 3rd in their other two races of the day.

In the Laser Radial class Annalise Murphy also had a race win, finishing 1st in her second race of the day. Combined with the 15th from her first race she has entered the top 10 leader board, and lies 7th overall.

Gerbil Owens and Scott Flanigan in the 470 were disqualified from their first race of the day and have slipped one position to 24th overall following their 9th place in the second race of the day.

Laser sailor James Espey finished 25th and 28th in his two races. He lies 52nd overall in the 95 boat fleet.

Tomorrow and Friday will see the final races sailed before the top 10  competitors from each class advance to Saturday’s medal Race.