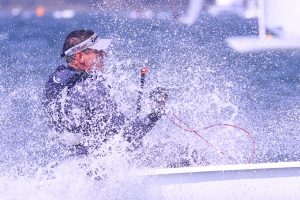 By Annamarie Fegan on August 19, 2017 in Junior Sailing, Lasers, Latest

The competitors were slow to appear in the dinghy park for day three of the Volvo Irish Laser National Championships this morning.  However, once word spread that a prompt launch time of 0930 hours would be adhered to, sails were quickly rigged and sailors were ready for Beachmaster Jim McGinley to launch ahead of the arriving cruise liner to Cobh.

The race location outside Roches Point gave ideal sailing conditions with a steady 10 to 17 knot breeze from the West.  Race Officer Peter Crowley and his team got three more races completed for all fleets.

Whilst a few sailors opted not to race today there were some fresh faces added to the line up including local sailor Johnny Durcan who was just home from the Laser Radial Youth World Championships in the Netherlands.

In the Standards, the first race this morning gave Liam Glynn his first bullet of the event ending Finn Lynch’s winning streak.  However, it was only temporary as Lynch resumed his winning ways in the following two races.

In Radials, Luke McGrath of Royal Cork continues to lead the fleet by a 20 point margin going into the final day of racing tomorrow.  Chris Bateman of Royal Cork won the first bullet of the day with Toby Hudson-Fowler of the Royal St George winning Race 7 and 8 this afternoon.

In 4.7’s, Club member Jack Fahy competing under the Royal St George burgee also holds on to his lead overnight.  The first bullets of the day in the 4.7 fleet went to Tom Higgins of the Royal St. George in race 6 and 7.  Michael Carroll of Kinsale finished his day with a bullet in race 8 giving him joint series points with Tom of 18.

Results can be found here.

Daily report and photo gallery by Bob Bateman on Afloat.ie. and on Club Website – Bateman Gallery.