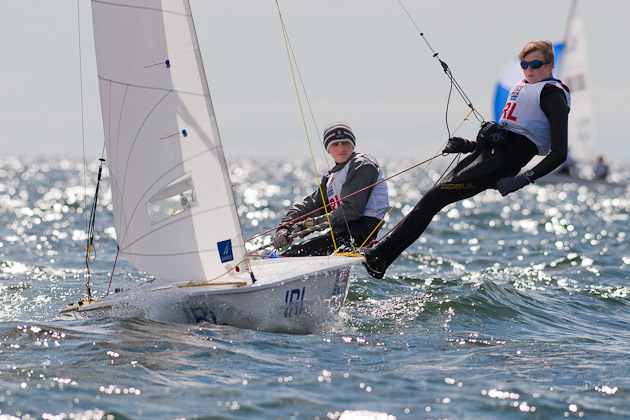 If conditions were challenging yesterday, they were even more so on day two of the Four Star Pizza ISAF Youth Sailing Championship in Dun Laoghaire today.
A westerly to southwesterly breeze was blowing off the Dun Laoghaire shore making the wind both shifty and gusty out on the water for the 343 competitors all under 19 years of age who have congregated in Dun Laoghaire from all four corners of the globe.  At one point  a squall passed over the fleet measuring 25 knots in the harbour.

Despite the testing conditions on the water, competitors in the eight classes all completed three races and with five races in total now sailed, have been able to discard their worst result.

In the 420 Boy’s class Patrick Crosbie and Grattan Roberts had a disappointing day with a 20-17-16 score today leaving them 16th overall after discard in the 30 boat fleet. “The first two races weren’t good,” said Roberts, adding that they had lost out on the first upwind legs. “In the first and second race, we got caught on the wrong side of a shift. The wind was up and down, it was never consistent.”

Racing will continue at 1200 tomorrow with two races,and with conditions forecast to be stronger and even more gusty.