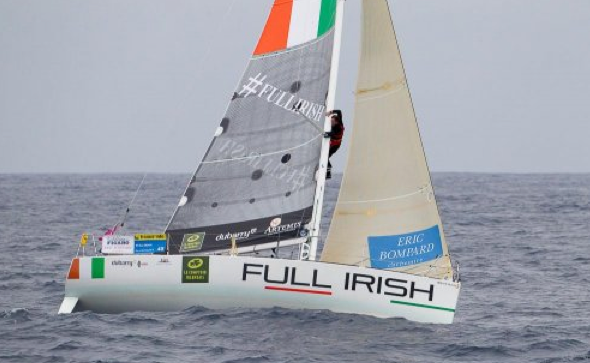 Yesterday a severe forecast predicting winds gusting to gale force 9 caused the race organisers to shorten the course for leg 4, but today conditions are looking improved, albeit with winds still gusting to 30+ knots ahead of a front scheduled due to cross the forty singlehanded sailors on Saturday.
Leg 4 now takes the 33ft long Beneteau Figaro 2s from Roscoff around and down the western side of Ouessant, then 23 miles south to the turning mark, the Chaussee de Sein buoy (off the Raz de Sein), before returning north through the Chenal du Four between Ouessant and the French mainland. From there the boats cross the English Channel to Wolf Rock off Land’s End, before heading east along the coast of the UK, shaving the Lizard and Start Point. Next they round the Needles Fairway Buoy off the western end of the Solent before recrossing the English Channel to a mark off Le Havre before continuing east to the finish off Dieppe. Total mileage for this course is 520, with the boats set to arrive on Saturday night.

Royal Cork’s David Kenefick Full Irish is hoping for a strong finale to his first Solitaire du Figaro. “I am disappointed with where I am going into the last leg, but that’s life l guess.”  At 22, Kenefick is the youngest competitor in the race and is lying 31st out of 41 starters.

“It is amazing to be here and be part of it,” he says. “I have followed the race for years so it is quite funny to be here. I have always wanted to do this race and it is very different when you are in it.
“I am very surprised how friendly all the competitors are. You walk along the dock and everyone says hello to each other. And the competition is unbelievable: There is no one missing from this event. There are no better sailors than Yann Elies, Michel Desjoyeaux, Armel le Cleac’h, Jeremie Beyou, Morgan Lagraviere, etc.”

David left to participate in the Figaro Project as an inexperienced Figaro Rookie Sailor and has proved to himself and all the rest of us just how capable he is to take anything that is thrown at him  and still come up smiling. We wish him all the very best in the final leg to Dieppe.  Bon Voyage David.