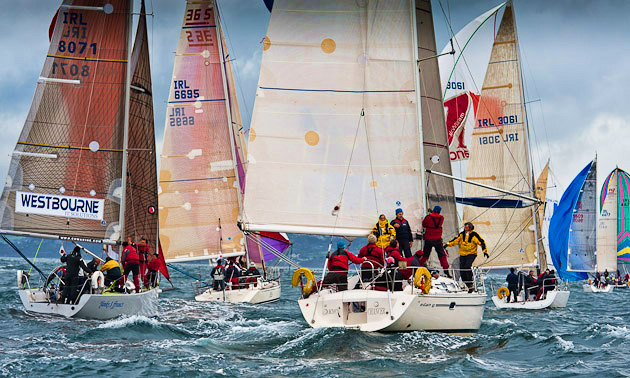 With thrills, spills, T bones, a medical emergency and seasick sailors the second Sunday of the CH Autumn Regatta provided very different fare to last week. First and most important of all was the sailor who was feeling unwell and whisked away in one of the Club’s high speed rescue RIBs to rendezvous with Crosshaven RNLI ‘Miss Betty’. The lifeboat crew then took the sailor on board and transferred him to the ambulance waiting to take him to CUH. The good news welcomed by all is the sailor involved is making a good recovery. 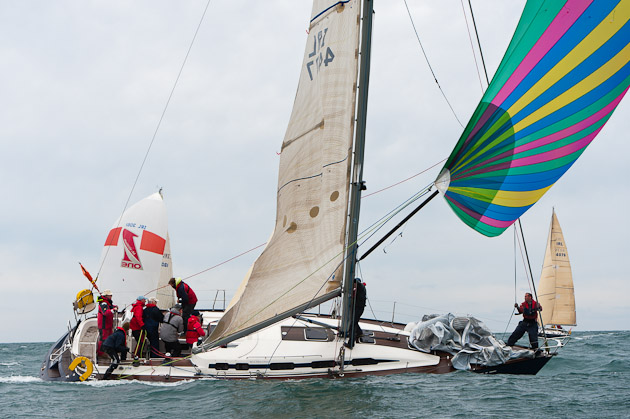 Outside the harbour Class One were the first to start today and they got away cleanly as they had a long start line square to the wind and off they went on a windward leeward course.  There was no catching Kieran Twomey’s lightweight flying machine ‘Gloves Off’ on the day. However, a ding dong battle ensued between Conor Doyle’s Freya and Tom Roche’s Meridian, Conor Doyle leading at the first weather mark but a better hoist on Meridian brought them into the lead. This lead continued for the three rounds of the course and ended up with Meridian coming into the finish line on starboard with Freya coming in on port but one boat length behind. Mary O’Keeffe’s X332 ‘Tux’ was also engaged in tough rivalry with the other two X332s. Similar situations of these ding dong battles pertained right throughout the fleet in today’s conditions. Bad Company, Alpaca, and Allure were also engaged in tough battles for supremacy. A similar situation also existed with the three quarter tonners, Iles Pitiuses, Per Elisa and Anchor Challenge. 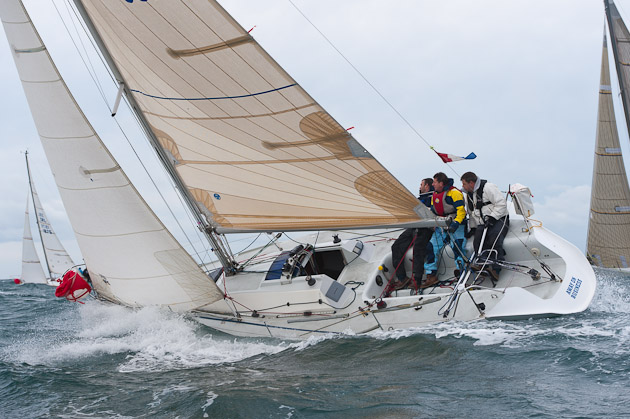 Today there was an awkward sea with wind over tide for a period and also the matter of the tide flowing out the harbour to create lumpy stretches followed by dropping into holes in the sea and with wind of about 16 knots occasionally rising to over 20 it put the crews to the test. There were many broaches and many sailors not feeling the best as a result and many raised voices urging fast action as required. 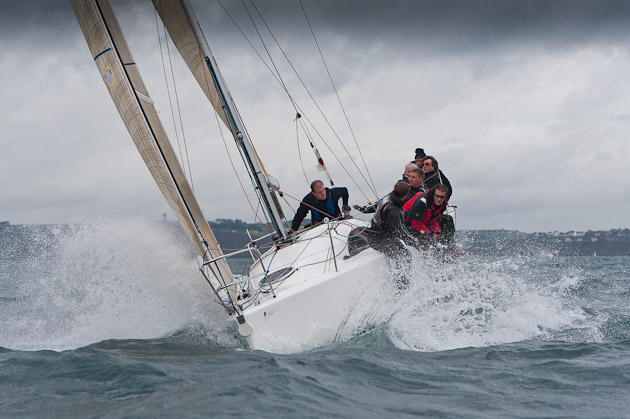 The second race was a triangle course, the wind having shifted some 30 degrees more into the south east and again there were many incident s including one port and starboard incident where the porthand boat tried to dip the starboard boat but in the conditions the boat wouldn’t bear away quickly enough.

Meanwhile, inside the harbour the Class four and whitesail fleets were having good racing as well with flat water and with the wind starting out at about 11 knots and before racing finished it had risen to some 16 or 17 knots. The 1720s were sailing on this course today and they had a fleet of nine boats.  Class four were given a course running between the East Ferry mark and no. 16 buoy while the wind shift that was affecting the outside harbour course caused the Race Officer to slightly alter the course on the eastern bank as well using EF2 and No. 13. 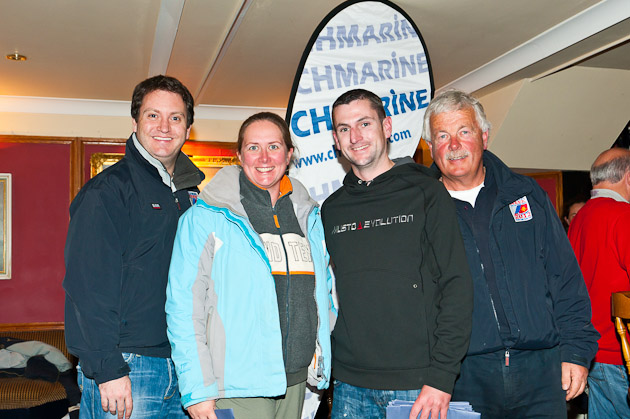 All in all today proved to be a wonderful day of sailing with the sailors congregating afterwards while awaiting the prize giving and regaling one another with stories of their experiences of the day that left everyone looking forward to next Sunday’s racing.