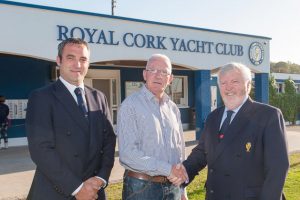 By Kieran on September 3, 2014 in Uncategorized

It is that time of year again, the Autumn series is only around the corner. Pictured here from right to left is the Admiral of The Royal Cork Yacht Club Mr. Pat Lyons with Mr. Stephen Hickey of CH Marine the event sponsor again for 2014 and Rear Admiral Mr. Kieran O Connell.

This year the autumn series at the Royal Cork will kick off on Saturday the 27th of September with the first two races. Then followed by food, live music and daily prize giving after racing. The league then continues over the following dates.

On the final day after racing the autumn series dinner and overall prize giving starting at 19.30 will be held in the club, please book early for this as it will sell out early. As always we are very lucky to have such a great event sponsor in CH Marine. CH Marine have sponsored this series for a number of years now and with out them it would not be possible to run such a premium event that give great quality race across five weeks. 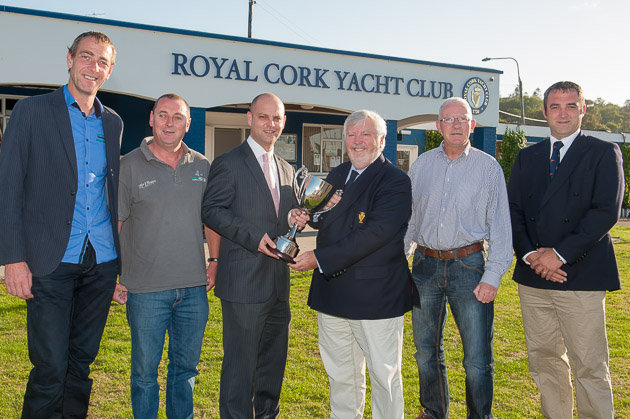 Crew from Yanks and Franks presenting the Admiral with the Vinny O Shea Perpetual Trophy for the boat of the Month over the autumn series.

Earlier this year, a long standing and well respected member of The Royal Cork Yacht Club and commodore of SCORA Mr. Vincent O’Shea (Vinny) passed away, he is greatly missed by all that had the pleasure of knowing him, and the club are delight with the news that Vinny’s family and crew off Yanks and Franks, have come together and presented the Admiral with the Vinny O’Shea perpetual trophy (seen pictured above). This beautiful trophy will  this year and every year be presented to the best performing boat overall in the Royal Cork autumn series. The club would also like to take this opportunity to pass on our thanks to Vinny’s family and crew for presenting the club with such a beautiful trophy, that will continue to honour  the memory of a great man, friend and sailor for many many years to come. I know Vinny would love to see as many boats as possible competing for it, and I look forward to seeing you all on the water.