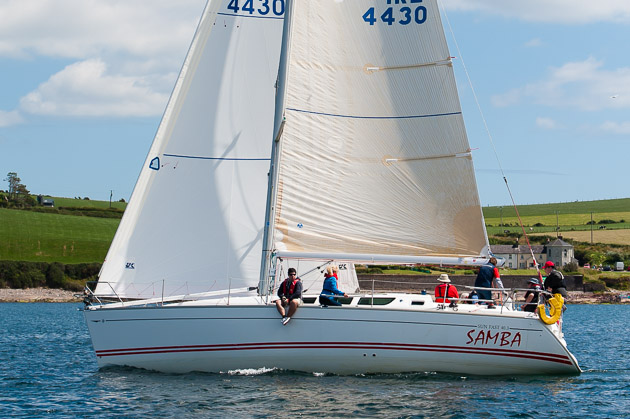 There are seventy seven boats taking part in the 2014 Cork Dry Gin Calves Week This is a figure that speaks volumes about the attraction of the area as it is a sailing area that has neither a sailing club nor a marina. However, what it does have is a holiday hub in one of the most scenic areas in Ireland that never ceases to attract the crowds year after year to take part in the sailing and other acivities.

There has been a marked surge in entries to Calves Week this year. Entries are up 25% with boats coming from clubs around the coast for the four day regatta. Boats from Waterford and Kerry Sailing Clubs are joining the usual strong contingents from KYC, RCYC, CSC and the Dublin clubs, and some very welcome visitors from the UK completed the strong racing line up.

Light winds were the order of the day for the first day’s racing. It was one of those days wit south east winds of about 5 knots increasing to about 10 knots with the onset of showers and dropping again when the showers had passed.

The competitors were split into six fleets and all got away with clean starts much to the delight of Principal Race Officer Neil Prendeville. The course was set out and around the middle and western calves

The cruisers were able to hoist their spinnakers from a laid mark south of West Calf Island with a leeward run back to the Amelia Buoy. Class 0/1 completed 3 rounds with the other classes completing fewer laps. A sailing breeze picked up, allowing the various fleets the opportunity to complete racing before the weather closed in unexpectedly

With a spread of entrants from sailing clubs around the country, racing competitively against each other, winners were produced from around the country. Conor Doyle in Freya from Kinsale YC) took line honours and won Class 0/1, IRC ahead of Colman Garvey in True Penance (RCYC) and Rob McConnell in Fools Gold (Waterford Harbour SC). In Echo, Freya again took the honours, ahead of local boat Infinity with Dave Harte and Des Cummins in Dear Prudence (RStGYC). In Class 2 IRC while Dexterity from Foynes YC (McEneff/Madden/Hobbs) took line honours, on corrected time the day went to Desmond/Deasy/Ivers RCYC, on Bad Company ahead of Derek Dillon, Foynes YC, in Big Deal and Viking with Robert Dix/Brian McKernon (Howth YC). Big Deal took Echo honours, ahead of Val Kriss (Nigel Dann, KYC) and Bad Company.

Cove SC, with a new arrival to the club, Sigma 33 Muskateer, wwas first over the line in Class 3 and rewarded with first in both IRC and Echo, ahead of Adrian Tyler, CSC Commodore sailing a Hunter Impala, Whyte Knight. Jimmy Nyhan on Outrigger (RCYC) and Padraig O Donovan on Chameleon (KYC) took third in IRC and Echo respectively.

Saoirse, under Richard Hanley from KYC won Class 4 IRC and Echo respectively, ahead of local boats Simon Nelson’s Witchcraft and Edmund Krugel in Barossa in Echo.

In the fleet of larger whitesail boats, John Downing in Samba RCYC, crossed the line first taking both IRC and Echo honours. Ger Hayes’, KYC First 36.7, Y-Dream took second in both handicaps. The Roche, O’Leary, Andrews, Dufour 425 Act 2 ,took third place in IRC and new entrant Samatom, a UK based XC45 sailed by Bob Rendell, was third in Echo. Aidan Heffernan RCYC, in Indulgence made a welcome return to racing in Ireland voyage to warmer climes. Also in Whitesail 1 Conor Phelan RCYC  is coming to grips with Endeavour an Oceanis 41.

In Whitesail 2, Ashanta took IRC honours, with local boats Aoife sailed by Hugh O’Donnell, and Giggles sailed by Peter Morehead, first and second in Echo, ahead of Calypso, another UK based boat sailed by John McCarthy MBSC.

Given the weather forecast the organisers are considering sailing the Round the Fastnet race tomorrow (Wed) that was due to be sailed on Thursday and will make a final decision tomorrow morning.