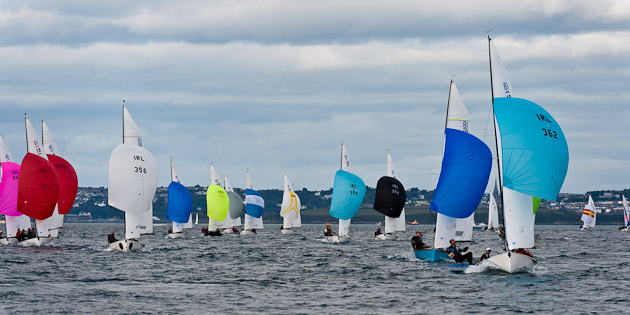 The fleet spread out as they headed for the Gybe mark in Race Two today. Picture Robert Bateman

Today with 8 to 10 knots of a westerly breeze saw the first day of the National  18s Irish Championships sponsored by North Sails. This is the largest one design fleet in the harbour and 18 boats came to the line.   Certainly the top half of the fleet showed just how competitive this class is.  Sailing off Trabolgan with the weather mark off Roches Point, the fleet got in three good races.  The first race was a windward leeward and this was followed by an Olympic course that took a black flag to get the fleet away cleanly. 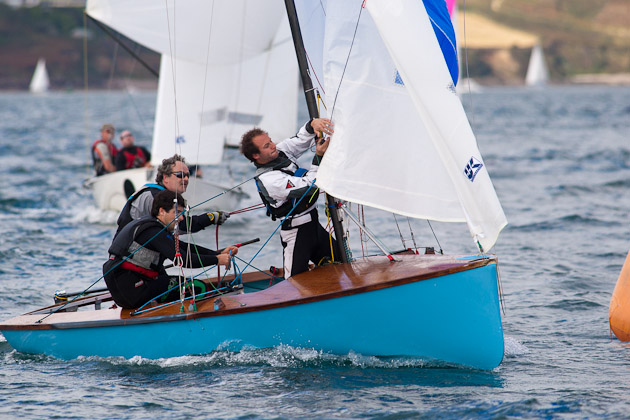 Intense concentration on the face of the Bowman on Bryan Hasset’s N18 as he drops the spinnaker while leading Race Two today. Picture Robert Bateman

Tonight the competitors will enjoy a Beach Hut “hoolie” and have been advised to wear something crazy and warm. They are sure to have a great night!

Also in the harbour today a fleet of twenty or so Optimists were heading out to get in some practice for the Cobbler League that will commence next weekend.  These intrepid young sailors can never seem to get enough of the water!

Tomorrow will also see the start of the highlight event of the Autumn Season the CH Marine Autumn Regatta with this event counting for the SCORA League.