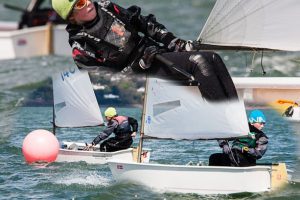 By Communications on September 9, 2020 in Latest, Optimist

Optimist sailors are competing in the Burns Trophy league, now in its 26th year, for the month of September. The league began last Saturday in beautiful racing conditions with 24 main fleet sailors launching to the Bank in a Westerly breeze.  Two races, plus one for fun, were completed under the stewardship of PRO Andrew Crosbie and his team.

The weather for day 2 of the league, Saturday 12th, looks promising for Copper Fleet Sailors to race in the event.

After racing on Saturday, Admiral Colin Morehead and Class Captain Derek Moynan presented the August League prizes to sailors. Well done to all who competed and congratulations to the prize winners.  Congratulations also to those who received promotions: Tommy Hiras and Ayda Bruen were promoted from Copper to Bronze Fleet and Ethel Bateman, Olin Bateman and Benjamin Barry from Bronze to Silver.

Thank you to Andrew and all who supported the sailors through day 1 of the Burns League.

Most of the competitors are taking part in coaching this Autumn. With the Nationals behind us, coaches can incorporate a greater focus on developing sailors team racing skills which will help prepare them for the Lisheen Mines Team Racing Event in late Autumn.