With favourable and suitable weather conditions forecast for this weekend  three times World Champion kitesurfer Bruno Sroka should be able to start his crossing from France to Ireland tomorrow, Friday July 19th. Accompanied by the Tourism office of Ireland for the first crossing out of a three year series of kitecrossings ( France / Ireland in 2013, Trans-mediterranean crossing in 2014 and New York – Brest kitesurf crossing in 2015 ), the World Champion of kitesurf is impatiently looking forward to this departure and has been preparing and waiting for it for several months! He will leave the Aber Wrach beach in Brittany with his kite at 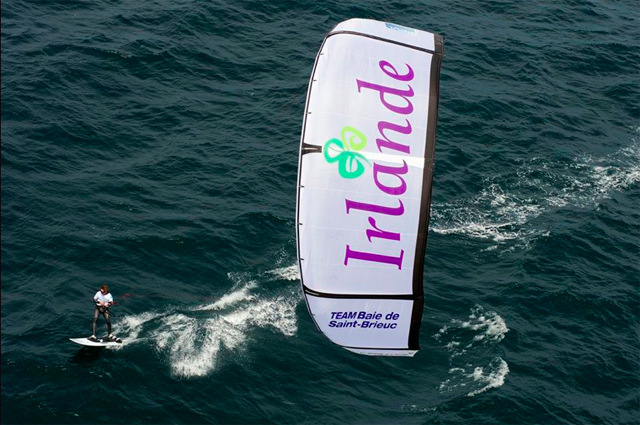 5.30am that is marked with it’s shamrock symbol  heading towards Crosshaven (Cork Harbour) and the action will continue for 17 hours!

So,within 24 hours Bruno Sroka will start the first of the three year series of crossings. This is not just a simple crossing. The first crossing will allow him to measure his different capacities as well as approve the different points for next challenges.
“ I admit that it is complete stress, but it’s exciting! This crossing has never been done. I want to succeed, and I do not want to disappoint the team I work with and who have supported me from the beginning. A dream comes true… »

Bruno Sroka, fascinated by kitesurf for over 13 years, has trained every day in the sea as well as on the ground for several months and feels ready for his  challenge. Accompanied by a team aboard a 12m boat he is ready to kitesurf 240 nautical miles (444km) for 17 hours at 15 knots speed. Some ambition when one remembers the Pont Aven crosses from Cork to Roscoff in 14 hours at 27 knots so it is some ask for the Kiteboard!

I quote Bruno “ I will not climb aboard  my safety boat but I will need to stop and rest one or two times on my board during the crossing knowing that after this little break it will be much harder to continue. My main crossing goal is to test my physical capacity during the crossing as well as some other essential points that will help me to organize, analise and succeed the other two kitecross projects”,

Tourism Ireland supports Bruno Sroka’s crossing and through this project wishes to share the water sport values of Ireland.

The arrival is scheduled at the mouth of the harbour, all going well, 22.00 hrs. Of course we all realize that schedules can be upset with wind and tide.  However, there is a tracker where the record attempt can be followed. For anybody interested it may be a nice experience to have a trip to Roche’s Point to greet the French visitors.