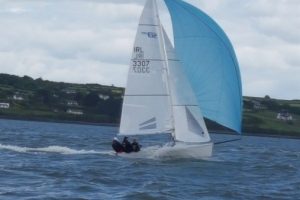 The SB20 Southerns are on at the Royal Cork this weekend and day one saw big breeze and some very big spills.

In a steady 20 knots, the RO Peter Crowley managed to get in the four high octane races, Darren Martins Shark Bait now holds a narrow lead from Aidan O’Connell’s Ruby Blue. Unfortunately the SB20 class president Justin Burke was forced to retire in race two when his fore deck separated from the hull of his boat.

Tomorrows weather is looking much lighter than today, so Peter and his team will have their work cut out for them to get the remaining two races in.

Continued….
Sunday did exactly what it said on the tin, very light and getting lighter. Peter and his team tried but failed to get the fleet off on the first attempt. But as the sun slowly heated the land the sea breeze kicked in around 13.30 and they managed to complete the series of six races in 10knots from the south, racing just east of Roches Point.

The winner after six race  was the over night leader Darren Martin and his crew Roger Pannell and Simon Murphy on Shark Bait, with Aidan O’Connell, Killian Collins and Mary Collins taking second place on Ruby Blue and Davy Taylor in third. Dave Barry on Lia won the Silver Fleet.

The Royal Cork Yacht Club would like to thank our kind sponsor C.H. Marine who supplied all the prizes for the event.