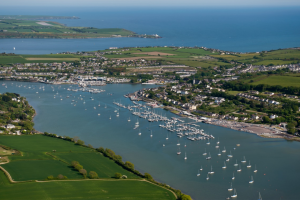 At the recent Blue Flag and Green Coast Awards for 2021 the Royal Cork Yacht Club was one of 10 marinas around the country to retain Blue Flag status. The awards were announced by Ian Diamond, Coastal Awards Manager with An Taisce’s Environmental Education unit in a virtual awards ceremony attended by Local Authorities, marina operators and Clean Coasts groups who volunteer at the beaches receiving Green Coast Awards this year.

The Blue Flag is one of the world’s most recognised eco-labels. The Blue Flag originated in France in 1985 when French coastal Local Authorities were awarded with the Blue Flag for compliance with sewage treatment and bathing water quality criteria. It was launched as an International programme as part of the “European Year of the Environment in 1987. In 1988, the first year sites were awarded outside of France 19 beaches and 2 marinas received the Blue Flag in Ireland. This year Ireland continues to punch above its weight with a record breaking 93 sites awarded, up 2 on last year’s total with 83 beaches and 10 marinas being awarded the Blue Flag for the 2021 season.

The programme aims to raise environmental awareness and promote sound environmental management of beaches, marinas and inland bathing waters around the world.  The 83 Irish beaches and 10 marinas that have achieved this accolade must adhere to specific criteria related to water quality, information provision, environmental education, safety and site management.

In Cork Warren, Cregane Strand has regained Blue Flag status last held in 2013, while Inchydoney East has been awarded a Blue Flag for the first time. The awarding of these two beaches brings the total number of beaches awarded the Blue Flag in Cork to 10 the joint highest to date. The retention of Blue Flag status at both Kinsale Yacht Club and Royal Cork Yacht Club means that Cork has a total of 12 Blue Flag beaches and marinas a record annual haul for the rebel county.