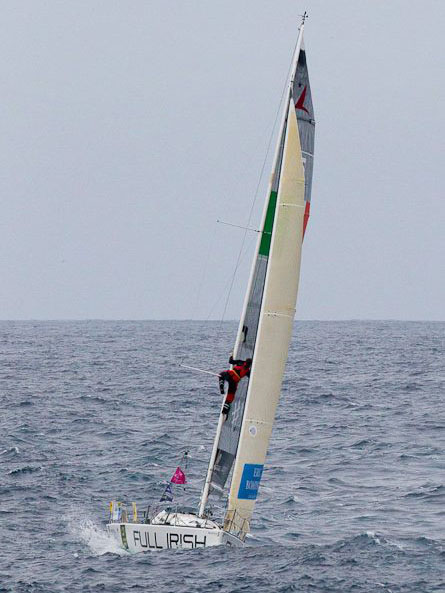 Worst affected has been Yann Eliès, overall leader of this year’s Solitaire du Figaro – Eric Bompard cachemire after two legs, as well as being the event’s defending champion. At 0930 UTC his Groupe Queguiner-Leucemie Espoir broke her forestay while lying in 17th place, just south of Les Glenan islands near Concarneau. Despite being on the wind at the time, Eliès managed to prevent his Beneteau Figaro 2 dismasting.“I didn’t change my forestay after the Transat, which was stupid. It is not great, in fact it sucks,” a sorry-sounding Eliès admitted.

All is not over for the former Vendee Globe competitor. With the wind forecast to free up between now and the finish into Roscoff on the north coast of Brittany, Eliès has jury-rigged his forestay and opted to continue. Until the wind frees up he won’t be able to sail at full pace with this set-up and this is certain to cost him his overall lead in this year’s La Solitaire du Figaro – but how much will he fall back and will it be irredeemable with one leg to go? At the start of this leg his advantage over second placed Fred Duthil (Sepalumic) stood at 57 minutes 6 seconds.

Three hours before this, the race’s sole female competitor, Claire Pruvot, broke the port spreader on her yacht Port de Caen Ouistreham. At the time she had just passed Belle Ile. Pruvot managed to secure the rig laterally and this prevented Port de Caen Ouistreham from dismasting. Pruvot was subsequently heading to Lorient under motor where she was expecting to make a repair to the spreader before continuing on to Roscoff.

Yesterday Irish sailor David Kenefick, at 22 the youngest competitor in the fleet, lost some ground  when he had to climb the mast to repair a stay.

Meanwhile the boats continue to make good progress up the course and are set to finish into Roscoff in the early hours of tomorrow morning, well ahead of schedule. After the boats rounded the turning mark of Ile d’Yeu yesterday evening, they have spent Saturday heading northwest up France’s Atlantic coast. Throughout this time they have been hard pressed on port tack or upwind with the westerly wind building to 20 knots – some way from the light winds forecast prior to the start. Leader for most of this period has been Morgan Lagravière aboard Vendee. The talented 26-year-old briefly lost first place after a costly offshore tack, but regained it soon after.

At the 1248 UTC Sched Lagravière was half way between Pointe Penmarch and the Raz de Sein with Nicolas Lunven (Generali) 0.8 mile astern and Xavier Macaire (Skipper Herault) a further half mile back. Three time winner of La Solitaire du Figaro, solo ocean racing legend Michel Desjoyeaux (TBS), was up to fourth.

Among the Brits, Sam Goodchild (Shelterbox-Disaster Relief) had lost a little ground, dropping to 15th, while Nick Cherry (Magma Structures) was holding firm in 25th. Following Claire Pruvot’s spreader breakage, Jack Bouttell (Artemis 77) is looking increasingly secure in his position as overall leader of the rookie class, currently lying in 27th place. Going into this leg he was just five minutes ahead of Pruvot while in third place overall was Benoit Hochart (ADOCIS / IB-Remarketing), 1 hour 30 minutes behind him. At the latest sched Hochart is 35th, 3.5 miles astern of Bouttell.

At the 12:48 UTC sched, Morgan Lagravière had 83 miles to go. His yacht, Vendee, was averaging 7.2 knots, although with the boats set to crack sheets over the course of this afternoon, combined with the tide turning in their favour at the Raz de Sein, their speeds should be substantially boosted. If all goes according to plan and there is no more drama then the first boat is expected across the finish line off Roscoff at around midnight tonight.