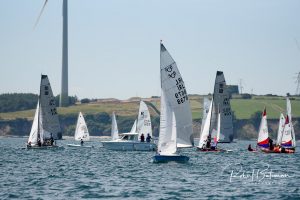 The Dognose & Miss Betty Trophy race  took place on Sat last, 23rd of June. The weather was ideal with 15knots of breeze and clear blue skies. Aided by the glorious weather close to 40 boats took part which was the largest mixed dinghy fleet to compete for one of the harbour trophies in a long number of years.

The Dognose Trophy which dates back to 1956 was competed for by Class 1 Dinghies including RS200s, RS400, Rs100 and National 18s and a 5o5. The race started near Number 10 with a beat to Dognose (No 5) followed by a leeward/ windward down to a laid mark and back to Dognose, No.9 to starboard and a finish off Aghada. The fleet split at the start with half of the boats heading off on starboard across the channel and the other half on port out of the tide onto the bank. When the two sides merged it was all very close with ‘Stormy D’ (N18 422) sailed by Ewen Barry, Robbie O’Sullivan & Richard Leonard leading followed by ’50 Shades’ (N18 405) Nick, Sue & Aarron Walsh and ‘Aquadisiacs’ (N18 404) Colin Chapman, Joanna O’Brien & Morgan O’Sullivan in 3rd. These positions were maintained right to the finish.

Once Class 1 had got underway Class 2 (which consisted of Fevas, 4.7s, radials & toppers) started. Unfortunately the Grimaldi ship left earlier than scheduled from Ringaskiddy and Ciaran McSweeney was forced to abandon the race to avoid the fleet attempting to cross the channel while the ship was approaching. Once the ship had passed the race was restarted at Dognose. It was a start with a difference in that it was downwind  to ensure the fleet arrived in Aghada on time.  The restarted race finished without any further drama and both fleets tied up to the moorings and all went ashore for some well earned refreshments in Rosies.

First Overall went to Sophie Crosbie in a Laser Radial followed by Darragh Collins in a Topper and Rory O’Sullivan in a Laser 4.7

Thanks to Ciaran, Ruth, Saidbh and all the other supporters & volunteers for making it a great day. 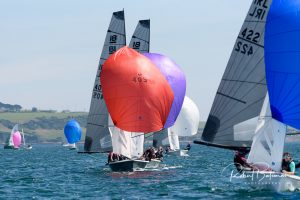 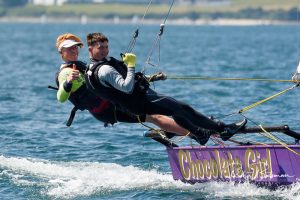 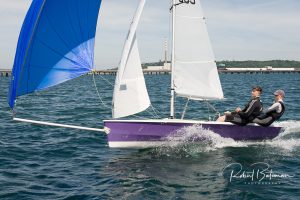