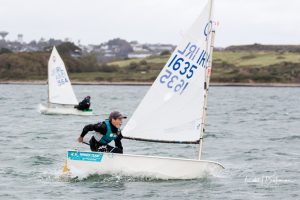 By Communications on November 29, 2020 in Latest

On Saturday night, 65 families and over 150 members tuned in to our annual junior laying up via Zoom. With the Late Late Toy Show stealing centre stage the previous night, the pressure was on to engage junior sailors and their parents for the end of year prize-giving, but that we did.

The night was MC’d by our Rear Admiral Dinghies, Annamarie Fegan and Annamarie was quick to recognise the monumental effort made by juniors and parents in achieving so much in 2020 considering the restrictions we faced. Hosting the AIB Optimist Nationals, running a sailing course, achieving over 50% of league races and executing an excellent coaching programme meant we were the envy of many clubs across the country. Annamarie thanked sailors for their patience and adherence to the guidelines throughout the year, to think all this was achieved with no access to changing rooms leaves a chill in the bones!

Having thanked the class captains and their committees for their tireless efforts in making this year happen, Annamarie highlighted the jam packed calendar that lies ahead in the Royal Cork in 2021 including the Topper Worlds, Irish Sailing Youth Nationals, 29er Nationals, Laser Nationals, N18 Championships, Women On The Water and Irish Team Racing Nationals.

A special mention was given to Harry Pritchard, Richard Mc Sweeney, Kate Horgan, Jamie Venner & Cillian Foster who were honored by Water Safety Ireland during the week for saving lives this year. They came to the aid of a young boy and his father in Fountainstown who were close to drowning. Well done all!

The highlight of the night as always is the presentation of the Pyewacket Trophy for the sailor(s) who best represented the Royal Cork in 2020. The trophy was originally presented in memory of Roy Disney who was a long term member of the Royal Cork and donated a generous bursary to junior sailing in the club. This year’s winner was Ben O’Shaughnessy. Ben’s very strong performance and eventual 2nd place in the AIB Optimist Nationals was without doubt worthy of the win. 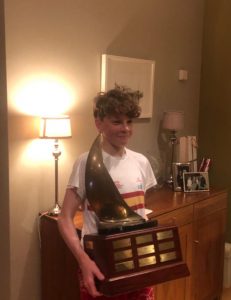 Also presented was the Frank Thompson trophy. The trophy goes to the volunteer who went above and beyond for junior sailing in 2020. Saki Curtin was a worthy winner having invested huge time in the creation of the Junior Pathway, as Junior Organiser for sailing courses and of course helping deliver the AIB Optimist Nationals as on the water safety lead. 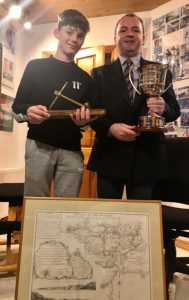 JP Curtin, 1st Overall in the Optimist leagues for 2020 with dad Saki, winner of the Frank Thompson award for his contribution to junior sailing in 2020

Saki presented the newly established Junior Pathway for 2021 which aims to give sailors of all ages and abilities a suitable entry to the sport while also developing skills for life, ensuring juniors can see sailing as a sport for life. Following her recent setting of the Round Ireland Double Handed Female Record, Pamela Lee gave a talk which nailed the essence of the junior pathway. More details to come on this pathway in the new year. 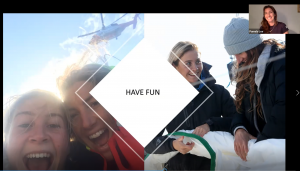 Pamela Lee inspires junior sailors and delivers the most important message of them all!

Other winners on the night included-

Well done to everyone and we look forward to an amazing 2021!