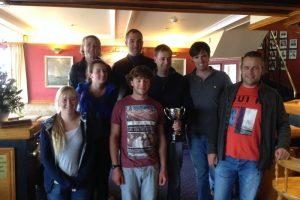 By Kieran on September 22, 2014 in Uncategorized

The inaugural Royal Cork Inter Club Cup was raced in light conditions last Saturday under Camden Fort. It was a dull and overcast  morning with 10knots from the North East. Teams from Baltimore Sailing Club, The Royal Cork Yacht Club x 2 and Monkstown Bay Sailing Club competed in what turned out to be a day of great fun, high octane action and some very close racing. The youths team raced on the right-hand course while the Adults were match racing on the left hand course separated by an exclusion zone. The first Match for the Adult was BSC v RCYC1, the pre start was tense as the teams did the dance to try and gain the upper-hand for the start, BSC won the start but ended up trailing to the top mark. RCYC1 lead down the final leg but mistakenly went to do another lap giving BSC the win. Race two was RCYC1 v MBSC and RCYC1 took the win by a very narrow margin. By the end of the round robin stage it was BSC 1st, RCYC 2nd, RCYC2 in 3rd with MBSC 4th. In the first semi Final it was BSC v MBSC. BSC managed to get a penalty on MBSC in the pre-start and went on to win the race and the semi final 2 – 0. Semi final two was RCYC1 v RCYC2. First blood went to RCYC1, but RCYC2 went on to win the last two matches to progress to the finals against BSC. The final was best of three matches and it went to the final match to decide the 2014 match racing Inter Club Champion, after winning the start BSC held a very narrow lead of less than a boat boat length for the hole race, and on the final leg RCYC2 made their move and attempted a pass just before the finish, both  teams declared that the other had infringed in the manoeuvre it was the umpires decision that RCYC2 had did not keep clear and was given a penalty which left BSC go on to win the match and the final. A big thanks to Brian Hassett for doing PRO Duties.

In the Dinghy team racing course, a Starboard square course was set. The club Fireflies were used in a 2 on 2 format . The Four junior teams were also Baltimore Sailing Club, The Royal Cork Yacht Club x 2 and Monkstown Bay Sailing Club. After a full round robin series of races the Semi Finals (best of three races) saw Baltimore beat Royal Cork 2 and Royal Cork 1 beat Monkstown to reach the final. Baltimore had an easy win in the first  race of the finals. However a well fought rear guard move saw Royal Cork push Baltimore very close in the second match. It was the last two boats crossing the finish line at exactly the same time deciding the event for Baltimore. So Baltimore won the final 2-0. Baltimore provided all the teams and spectators with a very good exhibition of excellent team tactics as well as good boat handling and speed abilities. Well done all. Thanks to Paul Tingle and Sinead Enright for doing PRO duties and to Nicolas O Leary and Kieran O Connell for organising the event, and Nicolas and Tom Crosby also doing on the water umpire.

It was a great day and hopefully the start of and annual event that will go from strength to strength. As always events like these would not be possible with out the help from club members who give their time so generously, thank you very much to all who helped out.