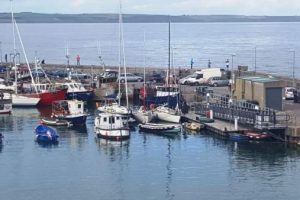 Saturday mornings race to Ballycotton was cursed with an unusual Northerly breeze progressively veering through the day to an Easterly whisper and then Nothing.
Despite the wind direction eight boats set off in great spirits and great sunshine on the fifteen mile plus course finishing at Ballycotton pier. Peter Webster O.D. set the fleet off on a fetch from Grassy which as each boat in turn nosed around Camden opened out to the first of the two downwinds of the day. Coracle VI set the pace having hugged the right hand shoreline to great advantage they popped their distinctive stars and stripes kite and charged out the harbour. As the course pulled around Roches Point the Easterly wind kicked in intermittently with those choosing to hold on to their spinnakers regularly bearing down in slalom like motions wetting the feet of hiking crew.

Altair, having inadvertently consigning their kite to a day in a car boot ashore, hugged the coast and as the white sails of Loch Gréine, Plumbat and Luna Sea followed this natural line it slowly, to many of the kite trimmers, became obvious that battling the big sail was no longer paying off.

Once clear of Power Head the fleet split with the majority heading out to sea to avail of the growing tidal push while Altair and YaGottaWanna hunted for breeze and lifts on the inside. Shore side, as at the rounding of Fort Meagher, held the gain and as the fleet converged closing in on Ballycotton lighthouse Altair had pulled out a substantial lead over Coracle VI.
Altair rounded Ballycotton island and kicked for home followed, in what was now becoming a very soft breeze, by Coracle VI. YaGottaWanna following at a distance rounding to a vacuum like dearth of pressure. The parade of sail from the right was almost ghost like as in turn Loch Gréine, Cavatina and Scribbler II edged to the line. Plumbat and Luna Sea without the option of a kite reluctantly opted for the engine. 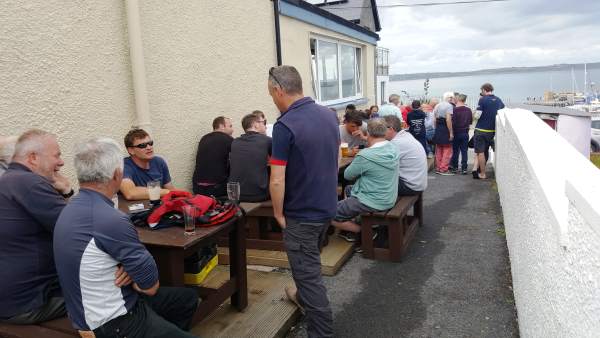 Chips and Pints were in demand at the prize-giving at the Inn By The Harbour where Altair dominated with wins in both IRC and Echo, they collected the Gas Rigs Trophy for their Echo win and will at the end of year laying up be presented with the newly commissioned Paddy and Peg Walsh Trophy for the win in IRC. 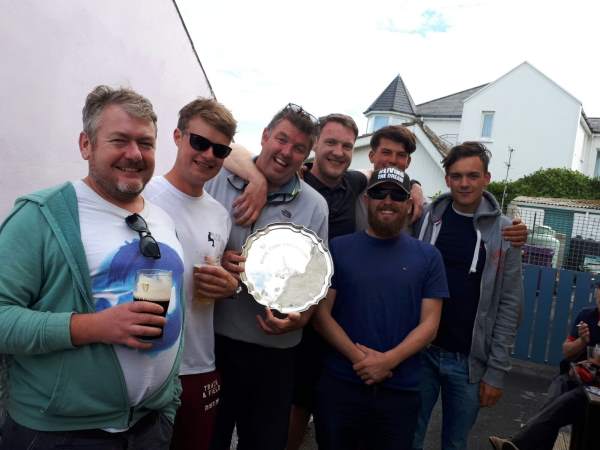 In a closely contested battle for Family boat honours and the Jim Donegan Trophy the three generations of the Collins Clan aboard Coracle VI and crew edged out the full crew of Scribbler II, with only three bodies on board the MacSweeney Clan also covering the three generations. 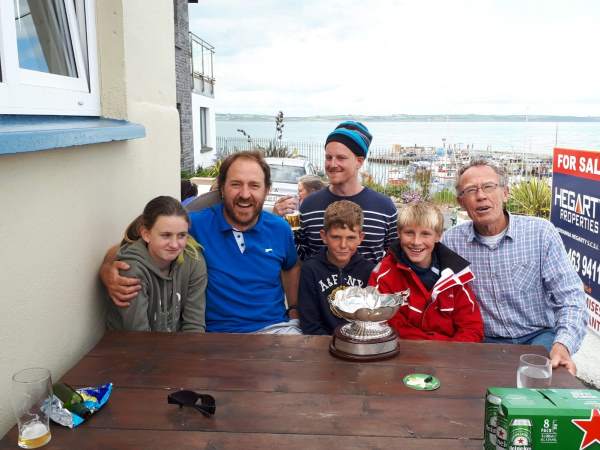 A pleasant motor home in glass like waters and the evening sunshine completed proceedings.
This race is just one of the longstanding traditions slowly being lost in our club and we would appeal to any boats or indeed potential crew contemplating joining the Cruiser racer scene, even if only occasionally, to get in contact and come sail with us. It is way more inclusive and accommodating than it might appear from the outside so come on in and enjoy sailing in a new way!