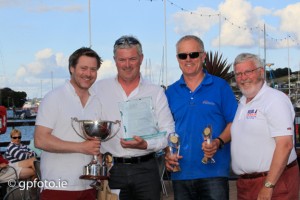 The 2014 SB20 National Championship was hosted by Royal Cork Yacht Club. The event was generously sponsored by Dubarry Ireland and Dinghy Supplies.

The SB20 is the countrys most competitive One Design keelboat fleet. Conditions proved ideal for the 22 competing boats with winds ranging from 5 to 15 knts. The high standard of race management ensured that the racing was exceptionally close throughout. PRO Peter Crowley and his team laid on 9 races over three days with the event going to the wire and settled by one point in the last race. Racing was held to the south of Roches Point with the tide helping competitors out each day and in on the return journey to keep commuting times down.

Day One saw Daragh Sheridan, Dinghy Supplies, getting out of the blocks quickly winning the first two races followed closely by Mel Collins, Who’s The Boss, with two second place finishes. Conditions ranged from 5 – 12 knts providing a stern challenge with place changing the order of the day. After four races Stefan Hyde in Bád emerged as overnight leader, closely followed by the chasing pack. This was warming up to being a high scoring event with all to play for on day two.

Day Two saw Darren Martin, Shark Bait, putting in a great performance with three second places to take the lead by ten points from Mel Collins and Bád having slipped to joint second place. Rob Howe, Milvus Milvus also had a stellar day with a 3, 3, 1 to move into contention.

Day Three proved to be very challenging for the PRO with a sea breeze competing with the gradient wind resulting in light shifty conditions. Bád went into Race 8 needing to put a dent into Shark Bait’s 10 point lead to have any hope of the title. Shark Bait, after a slick leeward gate rounding led Bád on the short beat to the finish. In a dying breeze Bad split tacks to find a line of breeze on the right hand side and finish in third followed closely by a cluster of boats leaving Shark Bait to cross the line in seventh. This left Bád in clear second needing seven points over Shark Bait in the final race to have a chance of the title. To add to the tension the weather was acting up making it extremely difficult for Peter Crowley and his team to set a course. With the time limit of 1430 now fast approaching a fresh northerly settled in and a course was promptly laid. Bád arrived at the weather mark in fifth with Shark Bait on her heels. Bád showing some excellent downwind positioning worked her way into second and held on to the finish with Shark Bait in hot pursuit. A tight cluster of boats finished behind Bád with Shark Bait shipping a ninth. This left Bád one point to the better, helmed by Stefan Hyde (RCYC) and crewed by brothers Jerry(RIYC) and Jimmy Dowling (RStGYC) as SB20 Champions 2014. Mel Collins finished third overall with Robert Espey in fourth.  James Gorman emerged as Silver Fleet champion with a superb second in the penultimate race.

Kieran O’Çonnell and his team at RCYC are to be congratulated for organising an excellent event. A warm welcome was extended to all competitors with on and off the water activities carried out to the highest standard. RCYC are preparing a bid to host the 2017 SB20 World Championships, this would be an ideal venue for such an event given the professional race team available and superb race areas available.

Thanks to all evolved for making this a very successful event.