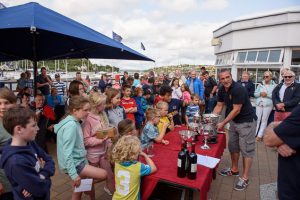 Three races across two days was scheduled for the Keelboat fleets for the 2018 At Home Regatta, with visiting boats from Cove Sailing Club and Great Island Sailing club joining the 17 boat fleet from the Club on Saturday the 25th and Sunday the 26th of August.

On Saturday the racing was postpone for one hour ashore while the RO waited for the forecasted breeze to fill in at 1300, as the fleet made their way to the start area in the vicinity of channel marker number 3 the breeze was just starting to build to a steady 10knot from the south. Race one got under way at 1300 with a W/L course for the spinnakers and a round the cans course for the white sails, first race in SPIN 1 went to Paul & Dierdre Tingles Alpacca, while in SPIN 2 the winner of race one was Desmond, Deasy & Ivers on Bad Company, in white sail first blood went to Pat Vaughan on Aramis.

Race two was under way just before 1430 with whitesail starting first and the Spinnaker class next sailing an Olympic course in a slightly freshening breeze, just after the start we had Kieran Collins on Coracle IV retire after grounding just under Roches point. Cove Sailing Club Boat, Kieran Dorgan and Jason Losty’s Altair won SPIN 1, while in SPIN 2 there was no stopping the team on Bad Company  as they sailed home another good win. In whitesail it was Derry Good on Exhale that won race two of the day leaving it all very open for the final race on Sunday.

Sunday morning was again as forecasted with 12 – 15 knots from the west, the fleets start at channel marker number 8 and Spin one and two headed out to harp mark to do a W/L between harp and a laid mark before a small slalom back oi the harbour to finish at cage, the white sails did not go out as far, only making it to E2 before a series of channel marks in the inner harbour and also finishing at cage. SPIN 1 victory went to Great Island Sailing Clubs George Radley on Cortagada,  but it was not enough to knock Dorgan and Losty on Altair off the podium. In Spin 2 Bad Company went on to claim another bullet winning them the at Home comfortable from Richard Leonard on Bandit. In the whitesail class Derry Good on Exhale narrowly Beat Paul/Peter Hassett on a Club 1720 to claim overall victory in the 2018 At Home.

The National 18’s held their Southerns on the Saturday of the At-Home making the most of the late sparkling summer weather to complete a six race series which was officiated by PRO Ciaran McSweeney.

Despite clashing with the Laser Nationals and the Topper Worlds, a fleet of almost 50 dinghies ventured to the Curlane Bank for the At-Home Regatta.  Saturday was spent in glorious sailing conditions under the watchful eye of PRO Stuart (Saki) Curtin. 3 races were sailed across the three classes of Optimists, Toppers and Mixed Dinghies.  10-12 knots of breeze with bright sunshine provided sparkling waters for the sailors. An earlier start on Sunday (so we could be back in time for cakes and crab fishing! ) also brought much stronger breeze. Some of the Copper Fleet Optimists and the Mixed Dinghy fleet found conditions a little more challenging on day two.

Ben O’Shaughnessy cleaned up in Optimist Gold Fleet with 5 bullets, despite being pushed very hard in the last race by Jamie Venner. Sam Coveney took Silver, a comfortable 5 points clear of JP Curtin. Liam Duggan took Bronze from Shane Collins by a single point. In the end, Max Tolan was a comfortable winner in Copper, Grace Coveney having finished second to him in each race.

In the Mixed Dinghy fleet Julie and Jamie Tingle showed how it’s done in the RS200 , having some spectacular reaching legs under spinnaker on the Sunday especially. Under PY handicap, Julie and Jamie won the Mixed Dinghy At home trophy. Second was Jack Young and Ellie Aneiros sailing an RS200 also having lots of fun under spinnaker and third was Holly Fegan and Erica Rhodes sailing very competitively in a Feva with amazing run on Sunday.  Have to mention some sailors who were racing for the first time, Oliver Soulsby with John Neville in a Topaz and Andrew Hassett racing for the first time in a Topper.There were 9 toppers out racing and consistent placings in the top 3 over the two days. Daragh Collins won overall with Cian McDonagh in second followed by new to Toppers Kate Horgan in 3rd.

Overall it was a great two days racing and as always with the At Home, nice to see all the dinghies mixing together with sisters, brothers and friends all out enjoying the sailing together. Click on this link for a flavour of the day  At Home Video

The sailors returned ashore to the traditional fare of afternoon tea, tug of war and crab fishing, and a great weekend was had by all on and off the water.  Despite many allegations and protestations, there is absolutely no truth in the rumour that the Rear Admiral (Dinghies) and the Club General Manager corrupted the tug of war competition where the Girls team prevailed under the watchful eye of Paul McCarthy.