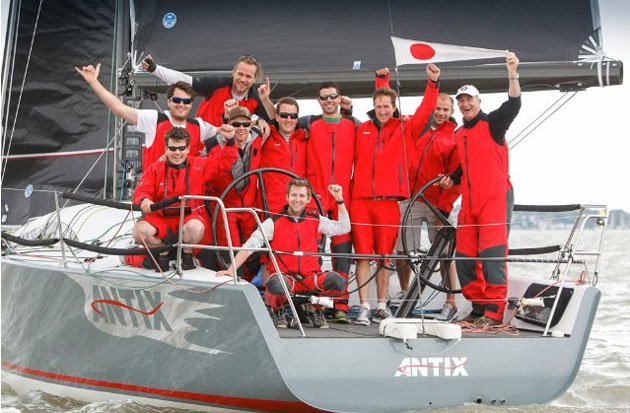 In the tightly packed combat zone, the prize of overall national champion was decided in the ninth and final race of the series. Three yachts swapped the overall lead during the last three races. Keeping in clear air and playing the shifts were the big factors towards a top performance but maintaining concentration, in an adrenalin packed final day, was just all important.

Anthony O’Leary’s  Ker 39, Antix, continued their impressive display, winning the first two races of the day to secure the IRC One title, and third place in the last race of the regatta was just enough to secure the overall win. Antix was crowned RORC IRC National Champion to the delight of the Irish crew.

“Antix has been coming here for years, we have won class here before but this is the first time we have won the event overall – it is just tremendous,” smiled Anthony O’Leary. “Dave Lenz did a phenomenal job on tactics and the rest of the crew have been together for many years and that understanding kept our manoeuvres clean. The combination of smart strategy and good boat handling was the key. As one of the smallest boats in our class, we knew that we would be dictated to at the starts, and on several occasions, we did have to tack away for clear air. However, our heads never went down, and many-a-time we were in good shape by the top mark. This is a confidence boost for the Commodores’ Cup but our feet will be firmly on the ground and we will continue to prepare for next month’s big event.”