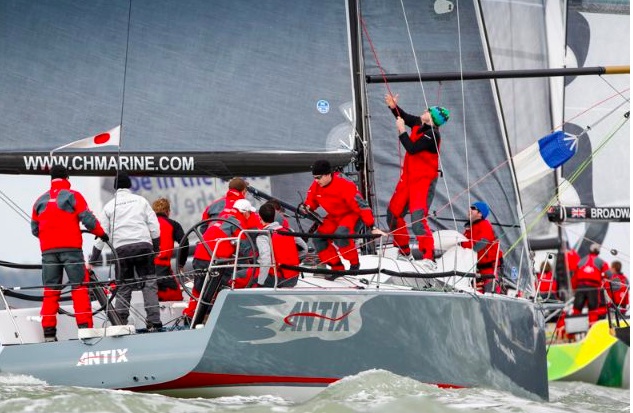 At the RORC Easter Challenge yesterday with four races scheduled, two were successfully held before the wind turned inside out. As the RORC Easter Challenge’s new PRO, Stuart Childerley, recounted: “For the third race, IRC Four and One managed to just get upwind over the tide before the wind dropped, so we shortened them. Meanwhile IRC Two and Three were trying to start and half of the fleet were still trying to get over the line four minutes after the start. So we pulled the pin.”

At the close of play, Anthony O’Leary’s experienced team on the Royal Cork Ker 39, Antix, is leading IRC One, but is just 1.5 points clear of Christopher Opielok’s Corby 38, Rockall IV, formerly Kieran Twomey’s  hugely successful ‘Gloves Off’. The lead three boats in IRC One each won races yesterday with James Gair’s Cowes Race School team on their Mills 39, Zero II, claiming the third in heroic fashion. Zero 11 was formerly the very well known  ‘Mariners Cove’. As Gair proudly described it: “We port tacked the whole fleet despite being the lowest handicapped boat… The boys were going `are you serious?’ And I said `we are going for it!’ So we crossed the fleet, led them into the beach where there was less tide and more pressure. We ended up going around the windward mark on Tokoloshe’s stern and winning the race’. Incidentally, Michael Bartholomew’s GP 42‘Tokoloshe has had considerable turbo charging carried out.  Otherwise Gair described yesterday’s conditions as being like snakes and ladders, and it being vital to get the best start.