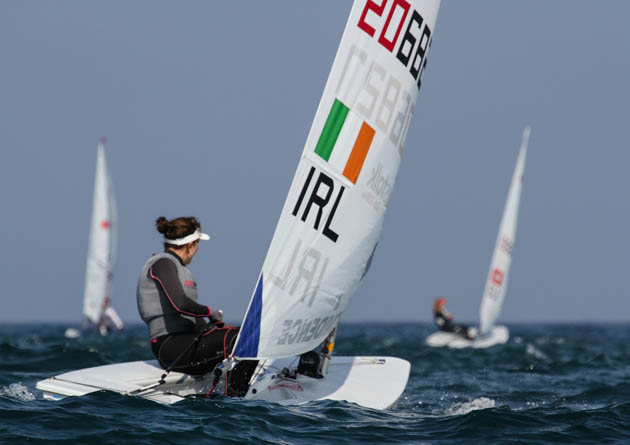 Today (16 September) was a very busy day at the ISAF Sailing World Championship in Santander. No racing yesterday meant the Race Management team were under pressure to complete the originally scheduled races, but also to make up for the missed races yesterday. A total of 55 races were planned across nine classes. The only class not sailing today were the RS:X windsurfing women.

Thankfully the wind had arrived by late morning and the 1,000 plus sailors enjoyed between 7-12 knots depending on which of the seven courses they were on. However it did die off again later in the afternoon causing postponements and abandonments all round.

Following their rest day yesterday, James Espey and Annalise Murphy were back on the water again with the Laser Gold fleets.

Annalise Murphy was on form for her first Laser Radial Gold race of the day. She finished in 5th place in the 60 boat fleet, an important result in such light, tricky conditions. Later in the afternoon Race 7 was attempted and then abandoned as the wind dropped. She is now 28th overall and 21st nation. After tomorrow’s final day of fleet racing, the top 19 nations will earn a place for their country to compete at the 2016 Olympic Regatta to be held in Rio

Ryan Seaton & Matt McGovern kicked off their 49er World Championship in style with an impressive second place in Race One for the Blue fleet. The duo’s 15th in Race Two was also a good result but they slipped to the back of the fleet in Race Three to finish 38th. They have one more day of qualification fleet racing tomorrow before the Gold, Silver and Bronze split.

In the Gold Laser Standard, Espey had two mid-fleet results. Lying 26th overnight, he slipped to 34th overall after a 28th and 36th in races 6 and 7. He will continue racing tomorrow with the top 10 from the 147 competitors in the Laser Gold fleet then progressing to the Medal Race on Thursday to fight for the world title.

The ISA’s 49erFX Development sailors Andrea Brewster and Saskia Tidey finally made their Santander debut this morning. Initially they sailed two races in the Yellow fleet placing a respectable 16th followed with an encouraging 11th. This put them 29th overall from 55 once the Blue fleet had also sailed. Just before 7pm local time the pair sailed one more race in very difficult light conditions. The entire fleet were struggling and the course was shortened but later abandoned.

The Finn class also began racing today which included one Irish sailor; Ross Hamilton. He had a 27th in his first race putting him 53rd overall. No further races were successfully completed.

Finn Lynch and the Laser Bronze fleet attempted one race in the early evening which was promptly abandoned.

Racing is scheduled tomorrow (Wed) for all fleets.