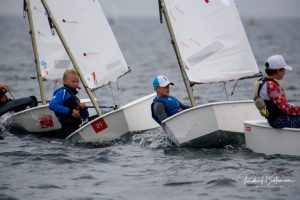 By Communications on August 23, 2020 in Junior Sailing, Latest, Optimist

Few events are following the sailing calender this year, but in the year that the Royal Cork celebrates its 300th birthday, the 2020 Optimist National Championships, sponsored by AIB, took place in the Club from August 13th to 16th. The person with overall responsibility for planning, organising and overseeing the event was Brian Jones: Director of Dinghies for Cork 300. Luckily for the Oppies, Brian took the stance: ‘If we can, we will’.

Because of Covid 19 this was no standard, pro-forma event: the main fleet was limited to 80 competitors, Regatta fleet to 35, foreign sailors couldn’t be hosted and parents of sailors were asked not to attend. Tallies could only be handled by sailors, trolley handles were sanitised each day and competitors followed a choreographed system of rigging, launching and recovery to maximise social distancing.

The lightest of north easterly breeze threw up a challenge on Day 1 and the fleet headed outside the harbour to race South East of Roches Point.  The determination of the PRO Anthony O’Leary to get racing started was demonstrated in the success of getting a race off on that first day in such conditions. The championship was on!

Weather on each of the Event’s 4 days was characterised by light wind. Despite this, and the challenge posed by the occasional tendency of some sailors to cross the start line early, a total of 10 races were completed.

RCYC had 20 Main Fleet sailors competing: 14 in Senior Fleet and 6 in the Junior. Ben O’Shaughnessy, sailing a magnificent event with three bullets, led the Seniors until Race 10 when HYC’s Johnny Flynn managed to turn the tables and finish one point ahead. Harry Moynan was our second highest competitor, finishing in 9th place, with half his race results in the top 10.  JP Curtin came 10th and along with Oisin Pierse in 11th sailed consistently well across the event. Liam Duggan came 14th and next was Emmet Lucas in 15th.   Alana Twomey came 17th followed by George Pritchard in 26th, Ellen Bruen in 32nd, Rian Collins in 34th, Isha Duggan (1st Silver and 1st Silver girl) in 35th, Craig O’Neill Jnr in 37th (3rd Silver), Benjamin Barry in 40th (4th Silver) and Julie Cole in 44th.

In Junior Fleet, well done to Lucy Moynan who finished 9th with half her race results in the top 10 (as well as 1st Under 11 and 5th Junior Silver). Andrew O’Neill came in at 11th overall, again with five top-ten placings, including a 2nd. Megan O’Sullivan came 12th overall and Shane Collins 14th, followed by Caoimhe Corkery in 18th and Matt Mapplebeck in 27th.

Well done to every one of you.