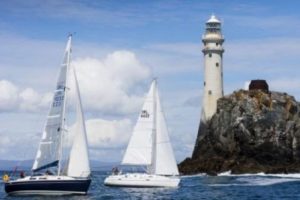 By Kieran on May 17, 2016 in Cruisers, Uncategorized
Sunshine in the Harbour is a rare occurrence this year, so it was with great delight the seven crews competing in the first of the coastal races took to the water on Sunday morning, expecting light breezes and hours of sunshine. After a delayed start, OD Paul Tingle set the fleet off from Grassy on a lengthy beat to Cork Buoy, back to W2, out to the weather databuoy and back to finish at Weavers Point.
With an incoming tide to contend with, the fleet split early, with three boats opting for the East side of the harbour, and four hugging the coast of the western side. With such a long first leg, it took some time to judge which side payed off, but with about a mile to the first mark, it was apparent that those who went west had been the wiser. Hindsight really does have 20/20 vision. The four wise men, Alpaca, Luas, No Gnomes and Tambourine were around and well on their run back to W2 by the time the others had reached Cork Buoy. With a freshening breeze building, any hope of catching up on the remaining legs soon faded. Rioja, YaGottaWanna and Loch Greine trailed the lead boats home. The competitors returned to the club, all happy with a day of sunny sailing on our beautiful coast, some happy with race tactics, others slightly rueful. 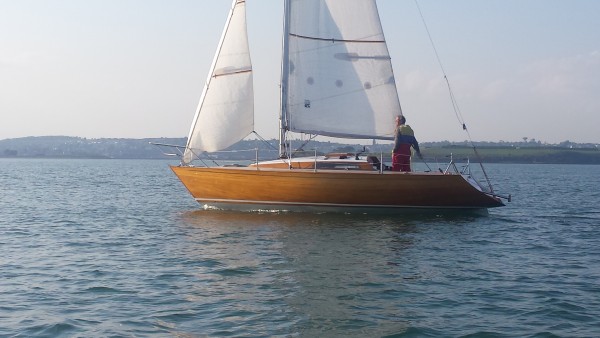 Special mention must be made of the “Crew of the Day” on Tambourine, Kieran Collins very ably assisted by Granddaughters Sophie and Emma, teaching the next generation of sailors what coastal sailing is all about.
Next outing for the coastal and two handed league is Sunday June 12 th . So grab the kids or grandkids or that friend who keeps saying how they would love to try sailing, and join us on the coast.

RCYC Optimists Prove Strength in Depth at Leinsters
Mixed Dinghies Are on a Roll….