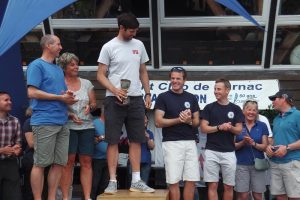 Excellent race management, in mixed conditions over four days, made for a brilliant RS Eurocup in Carnac at the weekend for the large RS fleets competing.  The RS400 had the largest, and one of the most competitive fleets with 31 entries.

Emmet Ryan, who had travelled to a well-attended Garda event last season, and was coming off the back of a 3rd place at a very competitive Irish Eastern Champs with brother James, commented that the standard at this year’s European adventure was every bit as high as the top class racing he had experienced in the Italian mountains twelve months earlier.  Like at that event, Emmet started really strongly, and was best of the Irish with two 8th place finishes on day one.  The Ryan’s were to remain consistent for the rest of the regatta, never really hitting the dizzy heights they are capable of, apart from one 5th place.  They were extremely consistent with only one race outside the top 10, and will no doubt be competing for honours in Ireland all season.

Day two involved a good deal more hiking, with plaining conditions and 3 longer than usual races.  When the sweat settled, Alex Barry and Richard Leonard had put in a great shift and brought themselves back in touch with the top end of the fleet after an average first day, with a 6, 3, 1.  This form was to continue for another two days, with two races sailed on day 3 and one on day 4.  In the final race Alex / Richard were to lead at every mark and record a second bullet in the event.  This mercurial team from MBSC/RCYC, who have become accustomed to the winning circle at the Irish events just kept reeling in and passing competitors on the score board, akin to Rory Mac on birdie charge.  They were to run out of races in 3rd position, a brilliant result for them, their clubs MBSC and RCYC and for Ireland.

Paul Mc Laughlin and his crew and only lady to travel Michael Mc Minkey performed admirably and finished up in 14th place, followed by Robert O’ Sullivan and David Whitaker who faired particularly well on day one, and were to finish 19th.  ‘Uncle’ Liam Donnelly and his crew Richard Mc Caid came in a respectable 22nd overall.

The Irish RS400 fleets was well represented by the following teams in order of their finishing places: