A dramatic change in the weather conditions for the third day’s racing in Gas Calves Week 2015 brought the fleet out to the Fastnet Rock in brilliant sunshine and light winds.   The latter meant for a long day, particularly for the smaller whitesail and cruiser fleets, and some anxiety at the Rock for those boats whose arrival coincided with the change in the tidal flows around it.

Race Officer Alan Crosbie sent the fleets, starting in reverse order (Whitesail first), directly out to the Rock for the initial starters, and up Long Island Sound and around Goat Island for the faster Class 0/1 and 2.  Returning boats had a choice of route, and those who chose a run up Long Island Sound gained a clear advantage over those who chose to stay outside the islands.

Getting the better of the conditions, Paul O’Higgins on Rockabill V (RIYC) took Class 0/1 IRC ahead of Conor Doyle’s X442 Freya (KYC) with all to play for on the final days sailing for overall honours.  Ronan Harris on Jigmaree (RIYC) took third place in both IRC and Echo, behind the same boats in reverse order.

A boat from Cork Harbour will win Class 3 IRC but as yet it is not clear whether it will be one from Crosshaven or Cove. Jimmy Nyhan on Outrigger (RCYC) came in ahead of Muskateer (Doyle/Russell) from Cove with YaGottaWanta (RCYC) taking third.  Judy McGrath on Impala 28 Bonanza is still overall leader after strong results in the first 2 days.   In Echo, the race is more open with Diarmuid Dineen from Tralee Bay Sailing Club on Growler leading ahead of local boat Manzanita helmed by John Molloy (SHSC).  However longstanding contender Padraig O’Donovan on Chameleon (KYC) had the best result on the day in the light winds.

In Class 4 IRC, Shelly D would seem to have the overall prize sewn up after a third first.   Echo honours were won by Oonagh Buckley on Tete a Tete (SHSC). 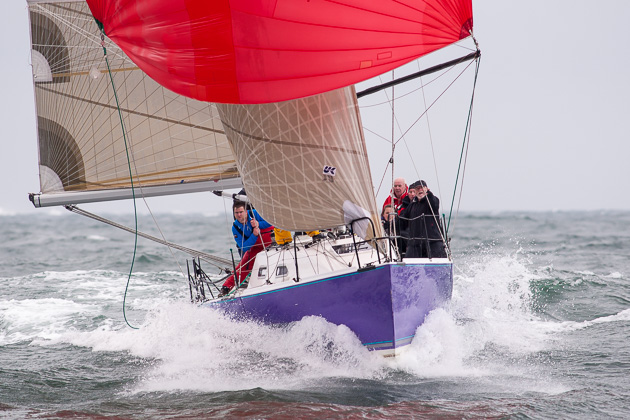 After yesterday’s challenging conditions this morning brought a moderate 16/20 knot southerly breeze with the remains of the swell from Monday’s gales and rain from a weakening low pressure system south west of Schull. The wind eased throughout day and the smaller classes finished in a very light variable wind. However, from yesterday’s gales conditions today went to Monsoon like rain and with mist descending midway through the race the Islands were lost from sight making navigation difficult for the competitors

In Class 2 Black Velvet (DLMBYC/SHSC) took the honours in IRC and now leads overall with Jedi (Cove Sailing Club) second and they jointly lead the class overall. Under ECHO Denis O’Sullivan won in Aris with Rioja from the Royal Cork second.

In Whitesail 1 IRC Windborne (SHSC) won again and leads overall. Y-Dream came in second on corrected time and lies second overall. Under ECHO Philip Smith in Just Jasmin won race 2. Bob Rendell in Somatom, having been delayed by bad weather coming from the UK, overnighted in Kinsale and made it to the start line today and placed second. Well done to him for his efforts

In Whitesail 2 ECHO Tadgh Dwyer in Brazen Huzie (SHSC) won race 2 and Colin Morehead in Giggles (SHSC) was second. However, Martin Lane in Chatterbox,(SHSC) with a second and third leads the class overall at the halfway stage.

Tomorrow, Thursday, is scheduled as Fastnet Race Day, a highlight of the week. However the running of the race is now in  doubt due to a forecast of light winds and a decision will be taken in the morning. A possible option is to sail the bigger boats to the Fastnet and give the smaller boats a shorter course.