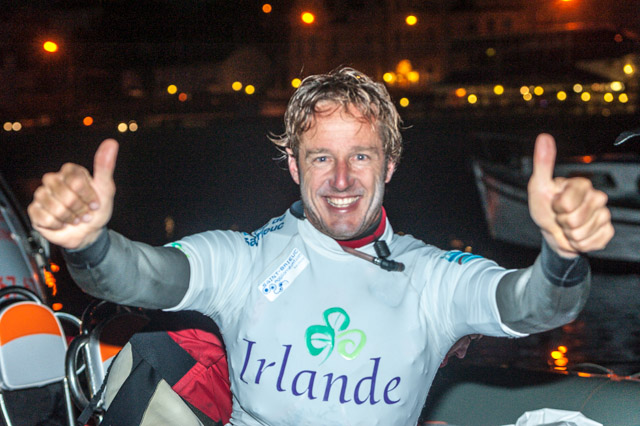 A triumphant Bruno Sroka on arrival at the Royal Cork Yacht Club having successfully completed his Kitesurf from Brittany to Crosshaven. Picture Robert Bateman

At 5.20 am this morning July 19th, Bruno Sroka left PennEnez beach at the Aber Wrac’h in Brittany to achieve his long-awaited crossing heading towards Crosshaven Cork, Ireland! With a 16 knots speed north-east wind he started with his kitesurf in the colours of Ireland for 240 nautical miles (444 km). It’s the first time ever that a kitesurfer undertook and successfully completed such a challenge.
He hoped to complete this challenge in about 16/17 hours and reach Crosshaven in or around 10.00 pm. All this he did and what a finish it made. 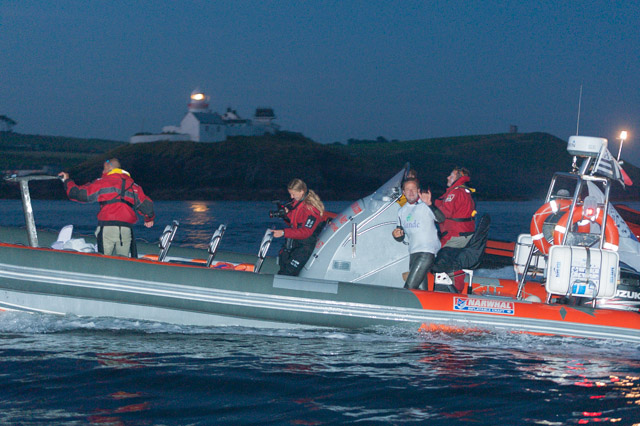 It was not easy to establish his whereabouts but a number of RIBS and sailing craft set out to the area of Roches Point approximately 9 pm prepared to wait for the arrival.  It was a lovely evening to await the three times World Champion Kitesurfer.  However, the sun went down in a brilliant blaze of light over the harbour and the moonbeams started to cast their light on the water.  Where was the Kitesurfer and his support.  Suddenly some of the boats started to leave Roches Point and took off in a south south east direction  your scribe, and photographer amongst them. Equally suddenly as if from nowhere a posse of RIBs came from behind to join in. Next thing the whole posse returned at a screaming pace towards Crosshaven encircling the triumphant Kitesurfer aboard his support boat which he had boarded at the outer mouth of he harbout.  It was truly like a scene from a James Bond movie, the moon casting this shimmering glow on the water, the twinkling lights of the  speeding boats, the flashing of the cameras with everybody trying to get a glimpse of Bruno Sroka who was clenching his hands in triumph and delight.  The wash from the boats was unbelievable to be speeding through, I don’t think I have ever experienced anything quite like it!! 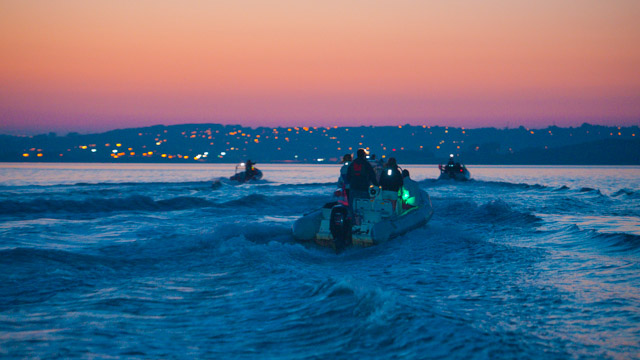 A few boats from the posse of Ribs Picture Robert Bateman

The Royal Cork Yacht Club was a blaze of welcoming lights and the boats moored on the marina were filled with sailors applauding the triumphant kitesurfer and the lawn area was also lined with more members applauding enthusiastically. The welcoming gathering included the Minister for Agriculture, Food and the Marine, Simon Coveney TD, at home in his club accompanied by his little daughter and a very large black dog!! 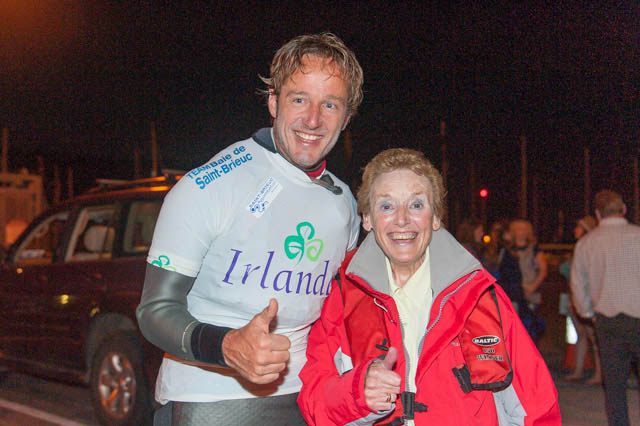 Following the story of Bruno’s record attempt was your scribe who published it on our website in early June. Picture Robert Bateman

Once ashore Bruno was surrounded by well wishers and admirers  all seeking autographs and wishing to be photographed with him.  Here this gracious and charming young Frenchman must be commended that in his complete state of exhaustion he found time  for everyone that wanted to speak with him and shake his hand.

Tomorrow morning will see a reception hosted at the Clubhouse where Bruno Sroka’s amazing feat will be recognized.