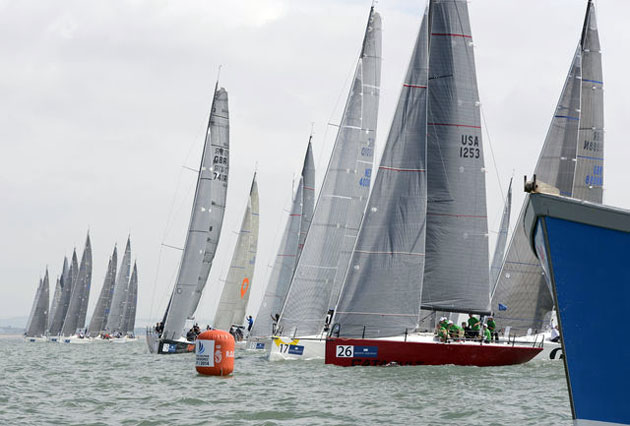 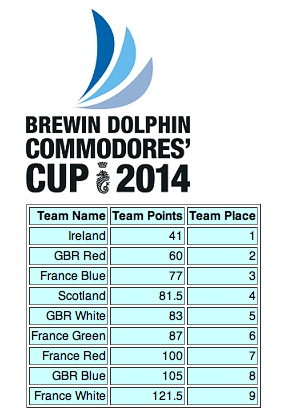 The Brewin Dolphin Commodores’ Cup commenced today in light foggy conditions. Ireland fared extremely well especially in Race Two and must indeed feel greatly encouraged by this excellent start. As it is an event without discards, coupled with co-efficient point scoring for longer races, all three members of the team have to perform throughout the event and the combination of  these factors makes it all the more difficult to win and enthralling to watch!.

Light winds on the Solent presented tricky conditions for the 27 boat fleet that saw Irish boats to the fore.

Irish Team Captain, Anthony O’Leary, won both short inshore courses, while Marc Glimcher’s Catapult delivered a highly consistent day with a 7th and a 4th with Michael Boyd and Niall Dowling’s Quokka 8 overcaming a 23rd place in Race One after a difficult start and were fifth in the afternoon race.

Race one started in a light Nor Westerley breeze but a big shift caught the boats that had headed inshore towards Osborne Bay then favouring the boats on the right.

In the second race Osborne Bay again became a fraught zone when half the fleet were becalmed there.

Tomorrow’s (Mon) offshore race will count for bonus points. However, the forecast is for winds to become light so it will be a particularly testing race for all competitors. First gun for this race will be at 9.25am and the race is expected to last for some twenty four hours. It is expected the RORC race management team will set a course that will ensure shortening if necessary.